Vantage Master Online is a fun fantasy wargame from Japan's Falcom. Like Lord Monarch before it, VMO is a freeware Windows release of Falcom's console title that was reasonably popular in Japan. Best described as "Fantasy General Lite," VMO is a turn-based, hex-based wargame that depicts the battle between spirit summoners called "masters". Your alter ego in the game is one of the 18 masters and fight against the enemy by summoning the spirits, called "Natial". To finish each map, you have to reduce hit point (HP) of the enemy master to zero. Summoning Natials and casting spells cost a certain number of magic points (MPs), which can be replenished by finding and occupying the "magic stone" hex on the map.

Each battle follows the same pattern: the first thing you do is to summon Natials, then it's time to move your alter ego and Natials across the hex-tiled map to attack enemy master and his Natials. Similar to SSI's Dark Legions and to a certain extent Archon, the key to success is to exploit each type of Natial's advantages and/or disadvantages to the fullest. The Natials are divided into 4 elemental spheres: earth, water, fire and heaven. Each element is superior to one other element and inferior to another element: Earth is superior to the water, water is superior to fire, fire is superior to the heaven, and finally heaven is superior to the earth. Some Natials are also grouped into as either day or night. Natials' battle abilities will be affected by the terrain they are standing on, as well as the type of map you are playing.

The game offers 4 modes of play. In Scenario and Expert modes, your master will be assigned by the computer automatically after you answer a few questions. In Scenario mode, you have only a limited number of spells and Natials at the beginning of the game. Similar in RPG games, your master will gain new spells and Natials as he gains experience. In the "Free Battle" mode, you can choose to play as any master and can adjust all of the ability levels. The Expert mode is similar to the Free Battle mode, but it comprises 8 high-level maps which you have to complete one by one. Lastly, you can compete against another human master over LAN, TCP/IP, modem, or serial cable. This makes the game much more replayable and interesting, since the computer's intelligence leaves a lot to be desired (a leftover perhaps from the game's console roots).

Sharp anime-style graphics, a good variety of Natials and spells, and a decent range of maps makes Vantage Master Online an interesting and enjoyable fantasy wargame. Anyone who finds Fantasy General too difficult may find this game more fun, although wargame veterans will be disappointed at how easy it is, and how much more simplistic the mechanics are compared to Master of Magic. 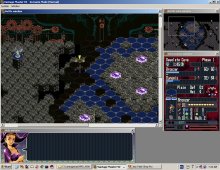