One of the best computer translation of a non-computer games ever made, MicroProse's Magic: The Gathering not only deserves a Hall of Fame status for its faithful rendition of Wizard of the Coast's blockbuster trading card game of the same name, but also for the numerous innovations that are only possible as a computer game.

For the uninitiated (and have never played Master of Magic before), Magic: The Gathering the card game pits two players, as powerful wizards, against each other in a magical duel, where each wizard can cast spells, summon monsters, and invoke various enchantments or curses. The game is turn-based, with each turn comprising several phases. The rules are too intricate to go into detail here (follow the link below to a good beginner's introduction to Fifth Edition Rules)-- suffice it to say that there are 5 colors, i.e. disciplines of magic, each with its own characteristic appropriate to that element. Blue, for example, is water, which prefers illusions and guile. Therefore, there are many blue illusion spells, and 99% of all blue monsters you can summon can swim. Green, on the other hand, represents Earth. You will therefore find many regeneration cards and forest creatures in this discipline. There are many types of cards: enchantment (which typically lasts infinitely, as long as it's maintained and not destroyed), creatures (which you summon), instant (spells that can be cast only once; the card must be discarded after use), land (gives our mana), artifacts, and more. This computer game version, in contrast to the horrendous BattleMage game from Acclaim which is based on the same license, truly brings all the fun and subtleties of the card game to life via an elegant point-and-click interface and excellent graphics that does justice to the cards' original intricate artwork.

Not content with giving the players just a card game rendition, MicroProse wraps the entire card-game mechanics around an epic fantasy storyline, set in the world of Shandalar. As a novice but noble wizard, your goal is to defeat the powerful evil wizards who are wrecking havoc on the land. After creating your character, you start with a random deck, which include very standard (i.e. not very powerful) cards, most of the color of your choice. You amass more powerful cards by winning duels with wandering monsters, or taking on quests in the various villages using the multiple-choice interface that is based on a simplified version of Darklands engine. The game also introduces a new concept of gems: which are difficult to obtain, but can be used as currency to trade for powerful, permanent artifacts that enhance your wizard's power (for instance, magical boots that lets him walk quicker than normal). There are 5 powerful wizards, one for each color, whom you must defeat, each of whom reside in a heavily-guarded fortress. The bad news (and my only big gripe with the game) is that you cannot save in these castles (or any dungeon, for that matter). This means that you will have to replay many, many hours of stressful duels if you die right before getting to the damn room where the enemy wizard is in. Of course, defeating each of them gives you a great sense of accomplishment, and the best news is that all the minions of that wizard disappear forever from the game. No more centaurs once you defeat the green wizard, for example. Another nice touch is the fact that every time you defeat a monster, you will see its boss lose some magical power (they are all psionically connected, it seems). It is therefore possible to gauge your progress, and see when the wizard is weakened enough for you to summon the confidence to attack his or her stronghold.

Virtually infinitely replayable, with gorgeous SVGA cards and backdrops, an extremely elegant gameplay interface, and a challenging AI, Magic: The Gathering is a definite must-have for every strategy gamer's collection. If you have never played the card game before, this computerized version could turn you into a hapless addict. And if you're a fan of SimTex' Master of Magic which is based on the card game, you're in for a real treat.

The eponymous Magic: The Gathering is quite easily the best adaptation of the collectible card game you will ever play. While it adds an adventure storyline aspect to the game, it doesn't sacrifice the heart of the card game upon which it is based.

Duel mode consists of a quick match or series of matches against your opponent using one of many prebuilt decks or using one of your own design. You can choose from a comprehensive collection of Alpha, Beta, Unlimited, Revised, and 4th Edition core sets, as well as the Arabian Nights, Antiquities, Legends, and The Dark expansions. Alternatively, Duel mode can be played as a sealed deck format tournament, starting with six sealed starter boxes or booster packs of your choosing.

World mode is the story campaign of the game. You find yourself in the world of Shandalar where five wizards, one from each of the governing colours of MTG, are conspiring to raise a great evil. It is up to you to prevent them from bringing destruction to the world. You start with a basic deck of one or more colours, depending on the difficulty level you choose upon starting the game. Cards are won by ante, found, earned through quests, etc.

The user interface while dueling can seem a little convoluted at first, but handles the play mechanics of the card game well - players familiar with the Magic: The Gathering card game will feel right at home once they get used to this UI. Players unfamiliar with the card game may have a slightly hard time getting into and learning the game but an interactive Tutorial has been included to facilitate this. 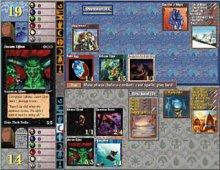