One of the best strategy games ever made, Lords of Magic: Special Edition is an excellent fantasy strategy game that, much more so than G.O.D.'s overhyped Age of Wonder, deserves to be considered the true spiritual sequel to SimTex's acclaimed Master of Magic. Unfortunately, the first incarnation of the game suffered the same fate as infamous Battlecruiser 3000 A.D.: a wonderful concept bogged down by a frustrating amount of bugs and unfulfilled promises. Not until several patches later did the game become stable. Special Edition is essentially the latest patched version of Lords of Magic, beefed up with"Quest" feature, a revised map editor, and a few extra scenarios. But unfortunately by then, it was already too late to please gamers annoyed at paying for a buggy release. Make no mistake the second time around: LOM:SE is a true game worthy of every strategy gamer's library.

Games Domain's excellent review speaks volumes about how good the game is: "LOM:SE is lush with atmosphere. The strategic component, where you will maneuver all your armies and characters in a turn-based environment, is beautiful. The hills roll. The valleys reach. It all looks like an oil painting by that guy who used to do landscapes really fast on American TV, but died a few years back. On top of that, there are fluttering flags, beating wings of flying units, and generally lots to please the eye. There is an audio element to the scenery, too. Waters lap. The winds of limbo roar. Everybody makes some kind of characteristic swish, clomp, or flap. Plus the game has a pleasant, if repetitive sound track that's different for each Faith. I turn the music down to about half-volume, just enough for background radiation. All in all, a first-rate presentation.

Each of the eight Faiths you will be able to play in LOM:SE, while offering unique strategic and tactical options, are presented in the same extended campaign. The only variation is the composition of the main map. Whoever you are, it takes a long time to get to where you'd consider a big war with a despised neighbor. I'm not holding my play up as anything special, but it takes me five to ten minutes or so to do a turn (day), and that's if I have no big battles. By Turn 50, I'm just beginning to feel my oats. On the message boards players are boasting about their Turn 300 exploits. This is a long game.

Personally, I like the open-ended style. I'm generally not a big fan of linear-mission campaign games, and Lords of Magic delivers an engaging, almost role-playing experience with plenty of strategy and battle action. Nevertheless, some players may not always be in the mood to invest five hours laying the groundwork for a 50 hour game. For these instances, LOM:SE provides the "Quest Pack," which are shorter, canned scenarios with focused objectives and usually more generous starting resources.... The Death Quest starts you out as a necromancer, slaughtering elves and raising skeletons from your victims. What fun! Finally, my "Army of Darkness" dreams realized. But a mere five quests do not a "Quest Pack" make, in my opinion. Players who already own the earlier (patched) version will have to ask themselves if $20 (considering the rebate) is worth the price of admission.

Of more interest to me is the revised map editor, which lets me roll my own worlds replete with dungeons, characters, and magic items. You have complete freedom to lay terrain; place and remove cities, Great Temples, and other sites; define encounters; and customize lords and starting resources. The interface is excellent, by the way. When you're done, you've got your very own Lords of Magic game that's accessible via the "Custom" menu pick.

As it stands, the multiplayer options via modem or Internet are predicated on the assumption you can find up to three other people to simultaneously sit for an ungodly amount of time. Plus, with all the downtime and lags for zoom level shifts, scrolling, battle loads, AI processing, and human decision-making I don't know how a game with three or four players would be humanly possible. Perhaps this is a bit of the "me too" trend in game design, where the company supports online multiplayer options because it thinks it has to, not because the game is particularly well suited to them.

So this is not a practical multiplayer game. No shame in that. Ultimately, LOM:SE is the best computer implementation I've yet seen of pencil-and-paper fantasy campaigning for one, with all the trimmings. It focuses on strategic thinking, tactical ability, and character development (in that order) without skimping on the atmospheric graphics, voice-overs, music, and sound effects. LOM:SE also recalls for me some memorable moments in the better fantasy movies and books. A great companion for gray days and long winter nights." A must-have!

Lords of Magic is typical of a turn based RPGs. The player is given the choice to choose a faith ranging from the various elements. In the game your chosen element will be at war with the opposite element, example: Fire is at war with Water. After choosing the faith the player chooses the class, a strong and sturdy warrior, a quick and stealthy thief, or a physically weak but magically superior mage. The player is given a basic party and equipment at the game's start. Also given a set amount of ground possible to cover in one "Day" time is measured with a gauge that cycle through the NPC's turns.

Combat is visual and stat based with no turns involved, though an option can be selected to auto calculate the battle outcome, this is not always favorable because the outcome is based on character statistics. Graphics are superb and the story is rather cheesy, featuring the evil overlord Balkoth working to destroy the land of Urak. The characters can be equipped with various items, weapons, and armor. My favorite part of the game was finding enough resources to summon your faith's ultimate hero.

Another fun aspect of the game is commerce, not only does one trade but if a favorable transaction to a rival faction is made it can improve relations. So even though the Fire and Water people are at war, they can become allies through trade. On the other end, negative trade and hostility can make natural allies into enemies. The special edition featured side quests, using a specific faith's characters to recreate fantasy stories like the quest for the Holy Grail. The faith of Death is unlocked allowing for an alternate storyline, through the villain's eyes. For the most part I still adore this game. The downsides were the irritating wait time between turns and the difficulty directing a party in battle. The use of magic can also present itself as confusing, but with practice magic will become an invaluable part of battle. The storyline at times is slightly vague and actually requires reading. Lords of Magic is a wonderful choice for serious fantasy gamers. I highly recommend downloading this exciting game. 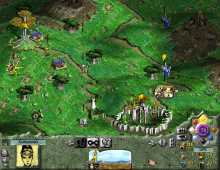 People who downloaded this game have also downloaded:
Lords of The Realm 2, Magic: The Gathering, Lords of the Realm 2: Siege Pack, Master of Magic, Dungeon Keeper Gold