Highly requested game. A lot like Sid Meier's Civilization, but set in the magic world of wizards, witches, spells, life and death, good and evil. The goal is pretty much the same as in Civ - kill 'em all! You'll have to do some magic researches, hire heroes (kinda like in Warlords), build armies, fight independent monsters and opponents... Since the game is so popular I believe there is no need to spend too much space and time to talk about it. Go ahead - download it!

Master of Magic must be one of the most unique strategy games ever made. Not only does it include all the best features from Civilization but a very well made combat engine is included as well. You start the game by creating the world you will play in. After that you can choose what race you want to play as. Some of the options are Dark Elfs, Halflings, Humans, Dwarfs, Lizard Men and many more. Each got their own advantage and depending on whether you choose a good or chaos aligned race you start the game in either the good world or the dark side of the world.

As mentioned several of the features in the game are taken from the famous game Civilization. This include both how you move around on the map, how you build up your city and the research part as well. But instead of researching new technologies you research new spells. Most of the spells can be used during combat but a few of them can also be used during the regular game that will either make your enemies weaker or give you more things or power within a certain period. There is a huge amount of spells to reach and they range from summoning monsters you batter weapons for your heroes. The heroes are available for hire and every time you engage in combat with one these heroes they can gain experience as long as you win. Once your hero has won several battles he can become almost a god if he just wins enough battles. A nice little addition is that you can see a title for each rank of your heroes as well.

There are tons of different units included in the game and you can get several allies with you like when one of your heroes explore a ruin or cave similar to the way it works in a game like Warlords. The graphics are fairly good, game engine is even better and overall everything works perfectly. Not only can you play Master of Magic for hundreds of hours but as there are several different races with their own unique skills and random maps you will play it as a new game every time. The different magic paths add to this as well as not all spells are reachable as you can only choose one path. Overall a great game recommended for all strategy and even roleplay fans because of the great fantasy related items in the game.

The game itself is something like an extended Fantasy-Civilization. And whoa! It got so many features. There's not only the usual build up your city - send out settlers to build more cities - declare war on your opponents - take their cities... It's more - you play the role of a mighty wizard and can aid your units in battle - and you don't only have ordinary units - you even get heroes. You can equip them with special weaopons, armor or other items. You can even produce those items yourself or let your heroes (or the other units) search for them - sometimes they are found, sometimes a merchant comes up offering them to you.

You choose your folk out of different races as Elves, Orcs, Dwarves, Nomads... - each with its own advantages. One of the most interesting features of this game is the fact that there are two dimensions in which you may play - one of them looking like our Earth - nothing special - the other, darker side - Myrran - is rough and the battles are harder. But the races that start there are usually stronger and in most times you won't find any of the other wizards there - at least not very early. This way you can grow to be strong before breaking up one of the towers that allow to travel between the dimensions (there are also spells for that that you learn later on). With your strong Myrran-units you can easily sweep away your enemies before they start finding ways to stop your invasion.

One of the most complete Strategy-Games I ever played. Some nice RPG-features mixed with the great fantasy-world(s). Hours and hours of fun!

A complex and innovative fantasy strategy game that was released with too many serious, computer-crashing bugs. Which is a shame, because it's one of the best strategy games ever, with cool spellcasting system inspired by Magic: The Gathering card game, RPG-style heroes, and Civilization-style building interface. Too bad the patch was needed for the game to reach its full potential. Arguably the best fantasy strategy game ever made, Master of Magic is, in its most recent incarnation, a must-have for all strategy gamers.

Once, in the year 1993, there came a game, a game unlike any other, Master of Magic. It gave many players what they've always wanted, supreme power of an entire village, which can bloom into the most feared capital in all the land. Basically, here's how the game goes, you start off as a wizard, now, you can pick from a variety of wizards, or you can create your own wizard with their own taste in spells. After that, you choose a flag color, a race to play as, your starting spells, and your abilities. So, after all that, you start off with one group of spearmen, and one group of swordsmen. Your capital at this time is nothing but a village, with a few of the necessities to keep going strong. You can hire more soldiers, or summon up creatures as you continue on with the adventure. Over time, you can build more buildings; create powerful weapons for heroes and champions. Now, I bet you're wondering, "What's a hero and champion?" Well, heroes are normal units who you can hire. They gain levels, get stronger, and have a wide variety of special abilities. They can also be equipped with weapons, armor, and other accessories such as pendants, rings, capes, etc. in order to improve their abilities. Now, champions on the other hand, are basically heroes on steroids. They have all the advantages of heroes, and much, much more. So, when you think you're ready to send your units out to explore the landscape, you will start making allies, who may become your rival, who may become your most hated enemy. 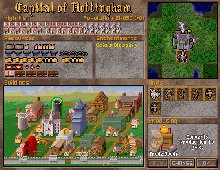 People who downloaded this game have also downloaded:
Magic: The Gathering, Master of Orion, Lords of Magic: Special Edition