The first SimTex that puts their name on the map is also arguably the best games Steve Barcia ever designed in his short career. This is *the* 4X space strategy game that has it all: solid AI, varied alien races that require different strategies to win, innovative combat and technology systems, intriguing espionage model, and much more. This game never leaves my hard drive since its first release, because of its immense replayablity and nearly inexhaustible strategic combinations. If you can play only one space strategy game, THIS is your best bet.

Master of Orion is a competitive game of interstellar conquest that combines exploration with conflict. You are cast as the immortal emperor who shapes the future of your race, as contact is made with the neighbouring races. Your objective is simple: control a majority of the known galaxy and eliminate all who stand in the way.

As ruler you must ultimately decide the destiny of your race as you make decisions on how planetary resources are allocated, where star fleets will be deployed, which races to fight, and which races to ally with. You begin with control of your home planet, from which you can explore and colonize nearby star systems. Your first decisions will centre around the rapid development of colonies into productive worlds, what types of technology to focus on, and which star systems to colonize. However, the true challenge begins when contact is made with other races, and complex strategies must be formulated to manage diplomacy, sabotage, espionage, trade, and interstellar combat.

This game is outstanding, it has massive replayability, and blows other strategy games of its time out of the water. It is complex enough, but not so much to where it makes the game a pain to play. The selection of races and the specialties of each races makes it a challenge to play with each (sillicoids aside) race. Just my thoughts, thanks for playing =] 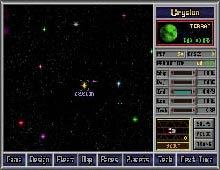