X-COM and its sequel Terror from the Deep are two veritable strategy masterpieces that need no introduction. Massively popular and deservedly so, the only reason you find them here on this site (which is supposed to focus on games) is that this is the by-now-hard-to-find native Windows 95 version, first released as part of X-COM Collector's Edition in 1998 :) For anyone who still needs convincing or has been living under the rock for years, you can find plenty of gushing reviews such as this one at GameSpot to change your mind:

"At first I didn't get it. The newsgroups were all abuzz about some game called X-something - everyone who played it seemed to become a near-zombie, talking about it incessantly and flooding the groups with endless threads and theories and strategies. It seemed interesting enough - building bases and killing aliens - but I still didn't get it. Frankly, it seemed tedious. I decided to take it home to see what all the buzz was about. Big mistake.

For the next few months, I spent every possible moment playing the game. Sleeping only a couple of hours a night, I would stay up 'till dawn playing, wake up minutes later and get right back into it. I was even going home from work at lunch to get a hurried hour in. It got so bad my roommates had a "talk" with me. Finally, I finished my first game, and proceeded to stumble about for weeks after, having paranoid delusions that aliens really were invading earth, cautiously looking for a flashing red "enemy in sight" warning in my peripheral vision.

And that was the brilliance of X-COM. The game managed to take two seemingly sterile genres - turn-based battle and resource management - and create a truly engrossing experience. The game is broken up into two main areas. As the commander of X-COM (a multi-national committee established to thwart an alien invasion), the player must construct facilities to house soldiers and research new technologies, while tracking alien movements and attacking their ships and troops. As more corpses and artifacts are recovered, scientists can be employed to learn more about the invasion and its origins. And every time the game starts to slow down a bit, a new piece of information will be delivered that creates a newfound sense of excitement and makes every battle seem that much more vital. Countless games later, the fun still hasn't diminished, and X-COM has held a proud position on my measly 400MB hard drive for almost two years.

If you call yourself a gamer but don't own X-COM, your collection has a more glaring gap than Ernest Borgnine's smile. Put simply, X-COM is a bona fide modern classic, standing proudly alongside Civilization and Populous as a benchmark in the evolution of strategy gaming."

UFO: Enemy Unknown is the first game that was released under the X-COM series. It was released by MicroProse Software. The game is also known as UFO Defense in North America.

The game takes place in 1998 and there are increased reports of UFO sightings. There are also reports of human abductions and terrorism by aliens. The world's governments form their own troops to deal with the aliens. Japan was able to create its own unit called the Kiryu-Kai but the force was not able to intercept any alien activities.

In December of the same year, the world's leaders meet up in Geneva, Switzerland. There they create the group Extraterrestrial Combat Unit- X-COM.

You will be in charge of the X-COM which starts operation the following year. The game starts exactly on January 1, 1999. First you need to choose the location for X-COM's first base using the Geoscape screen which serves as the map of the world. From this base, you can control the activities of the X-COM forces.

There is a war that will erupt between the X-COM and the aliens and were it would last for three years. Because of the war there ere hundreds of UFO activities that intercepted by the X-COM. There were also plenty of crash sites as

well as places that were attacked by the aliens.

Sending your troops to UFO crash sites will turn the game into a battle game where you have to defeat the aliens in a turn-based battle game. Your troops can win or lose to the aliens or you can also withdraw from the battle.

As the controller of the X-COM forces, it will be your decision what weapons that they can use, build new bases, recruit men which include engineers, scientists. You will also be in charge of research and development in the bases. The money for the X-COM comes from the nations that founded the X-COM force. The ten nations are able to monitor the financial status of the force through the financial report. The founding nations also monitor the status of the project and decide whether to make additional funding for the group or not.

The game is very interesting and intelligent and it will really give you a good time. The plot is well-made and makes for a really engaging game. The graphics is good, the game gas music that complements the whole surroundings of the game and the controls are easy to learn. I suggest you download this game now to experience a great alien adventure game. 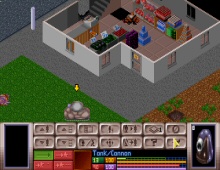 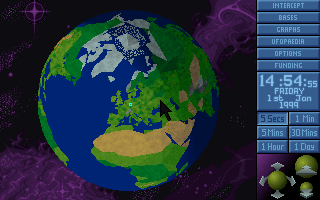