Dune 2: The Battle for Arrakis

This is the first RTS (Real Time Strategy) game that was released, and continues to be one of the best. The control of the game could be improved perhaps with some shortcuts to do the movements, attacks, etc.. but apart from that the game has great music, graphics, and overall gameplay.

Based on the books by Frank Herbert (and the subsequent movie). The original real-time strategy game from Westwood (the people who made Command & Conquer); recently updated with Dune 2000. This game was ground-breaking at its time, but the real-time strategy genre has since undergone some great improvements, which may make this game frustrating if you're not used to doing without those advancements. For example, you can only select one unit at a time, you cannot "queue" more than one unit to be built at once, there are basically no missions apart from "kill the other players", and the three houses (the three possible teams) all have basically the same units until quite late in the game. Still, these problems certainly didn't deter the thousands of people who played this game at the time.

The basic plot of the game is this; set in the futuristic world of Frank Herbert's, one planet in the entire universe produces a drug essential for space travel, known as "the spice", the planet Arrakis, known as Dune. Civilization is organised much like the feudal system. There is one emperor who is the official ruler and has his own army, the Sadukar. Supporting him are a series of feudal lords, each of whom have fiefdoms and are based along family lines and are known as houses (each house being one family). The emperor has issued a challenge; the house who can produce the most spice in a set time will be given control of Dune and so become the dominant house in the universe. And so the plot begins, with you as a young general in one of the three houses, trying to help your house gain control of the most valuable resource known to man.

Try this game out if you're a real-time strategy fan, and want to see where it all started, or you're a fan of Dune (the game really does capture the feel of the Dune world). Otherwise I'd advise Dune 2000, Warcraft (1 or 2), C&C or something similar.

One of my favorite Strategy Games! In fact, it's a real-time Strategy-Game - and quite a good one. The task is simple - earn spice, defeat enemies. To do this you gotta build up your base. The game goes through several different missions everyone a bit different to the others. Quite addictive game and it provides hours and hours of fun, coz' it's a TOTALLY different game depending on which clan you choose (Atreides, Ordos or Harkonnen). Of course the game's got something to do with the well-known Dune-Novels by Frank Herbert (that was his name, right...?), but to be honest I'm no Dune-specialist - you don't need to know the film nor the book. I saw the film because of the game and had to find out, that it hasn't got to do that much with it. Hm, all you Dune (book) - Fans, take it easy, it's a nice game - very playable - on a Dunelike Background. If you're looking for a very good Strategy-Game - this is the one. My #1-Choice in Realtime-Strategy. And folks: no need to worry 'bout the copy-protection ;)

Dune 2 is widely thought of as a revolutionary game for the RTS genre.

It was the Wolfenstein 3D of real-time strategy, I guess you could say. The story is loosely based on the books of the same name (minus the "2") by Frank Herbert. You control one of three Great Houses - the noble House Atreides, the insidious House Ordos, or the evil House Harkonnen - in a battle for control of the planet Arrakis, also known as Dune. Arrakis, a seemingly useless desert planet, is home to the most precious substance known to man: The Spice Melange. Without it, space travel would be impossible, and the Imperium would crumble. It is also the home of massive sandworms that attack anything moving on the open sand, as well as the Fremen - native warriors who have learned to use the desert to their advantage.

Overall, I found this game to be very fun. The game play is nice, and the music is very atmospheric (It follows the game play, playing faster music during battles). Although the graphics show its age, they're not terrible, and there are some nice effects, such as craters where vehicles had exploded, and tracks in the sand. Another thing I liked was that infantry units could be trained either individually, or in groups of three, who would move as one unit.

I have a few problems with this game, however. First off, the voice acting is terrible! thankfully, there isn't much of it. Secondly, the units of each house are almost identical, with only a few special units given to each House. Also, while getting the screenshots for this review, I found the control so be a bit awkward. Only one unit could be selected at a time, making it harder to coordinate attacks.

In a nutshell, Dune 2 is an excellent game, despite being a bit old. It's definitely a must-have for all fans of the RTS genre.

The building of a Dynasty. This is one of my favs. First realtime strategy game on the computer. You have to conquer two opponent 'houses'. You can choose with which one you play the game, each house with is own 'specialties'. House Harkonen, Atreides or Ordos. In order to vanish you opponent in each level you have to harvest spice with which you can build your base (windtraps, silos, heavy factory, turrets, etc. Gameplay is excellent, as is the music and are the voices! Top game.

Control of the planet Dune is a top priority for any faction that has aspirations of ruling the universe. That's why three Houses are engaged in a bloody battle, each knowing that Dune is the key to building an insurmountable federation. You can choose from any of the three Houses, Atreides, Harkonnens, or Ordos, and see if you can lead your people to victory. You'll face nine unique levels full of enemies, natural obstacles, and the unknown as you try to fortify your position and gain control of the planet. You'll have to build and defend your base, but don't forget that the only way you'll win this war is to attack your opponents. Finding the right balance between attacks and defensive maneuvers can mean the difference between victory and defeat, so plan your strategy carefully.

In case anyone is unfamiliar with the gameplay, here's how it goes. You have a very small base and a few units to carry out your duties. You have to expand your base and eventually build a refinery. From there, machines known as Harvesters will look for nearby spice, return to the refinery, and get your money. You then use this money to expand your base, build more units, and eventually overcome the enemy base in the area. That's pretty much it... except for the first two missions (in which you have to obtain a certain amount of spice to proceed), the overall objective is simply to destroy the enemy.

You first expand your base by putting down bricks to prevent corrosion, then placing your building of choice on top. You are a bit limited in where you can build your base (only on rock, not on sand) but that's usually not a big problem. First you need a windtrap to provide power... the more you expand, the more windtraps you need. From then, you can build the aforementioned refineries. Each level introduces something new…as you get farther, you can make Outposts (activates the radar in the lower-right corner of the screen), Barracks and Vehicle Factories (for making units), Repair Facilities (take a guess), Starports (for buying units on the market), Spice Silos (to store excess cash), and eventually the Palace, that lets you use the house's special power.

Each house is a bit different... the maps change in all of the campaigns, and there are differences in the units. While it isn't huge at the beginning (the Harkonnen don't believe in the small, speedy Trikes, for instance, but can build Heavy Troopers), eventually each house gets it's own really powerful unit to play with. So there's plenty to see and do in Dune. 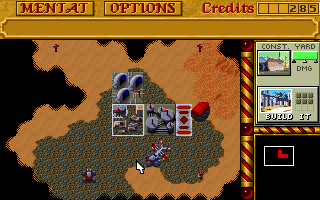 Dune 2: The Battle for Arrakis screenshot