This game is one of the most controversal games in gaming history - at least as far as I can remember. When it came out one of the two main gaming magazines said it was one of the all time greatest games ever made, while the other said it was crap. Basically I tend to share the first opinion.

The game really got atmosphere and throws you right into the world of Frank Herbert's novel. You play the role of Paul Atreides - the oldest son of the Atreides dynasty that just got the permission from the emperor to harvest spice, a mysterious drug of high value. Their opponents in this story are the Harkonnens who got this "license" before and aren't willing to give it up. The planet this happens on is Arrakis - a desert planet and the only known source for spice. Arrakis is inhabitated by a small tribe called Fremen - they adapted to the hard climate and the constant danger of the sandworms and they developed a religion that awaits the arrival of the Muad'dib - a kind of messiah. This is the role Paul will take - this is one of the goals of the game although many things are yet to come after you reach this.

In this plot of war and religion there is only one thing missing: a love-story - this is one of the few games featuring one - yeah, like I said once - we all need something for the heart sometimes - don't we? ;)

After all this game is very involving and the interface isn't THAT bad after you got used to it - the game is a genre-mix not everyone will like, I did and I know many others do as well and once you got into this game you will love it - for sure!

A neat adventure/strategy hybrid from Cryo, this game casts you as Paul Atreides, the protagonist in the classic Dune series by Frank Herbert. Although the game is fairly linear, there's enough strategy elements to keep things interesting: you must allocate your followers (the native Fremen) to various jobs, maximize spice production, and ultimately fight the Harkonnen with armies. Also features stunning VGA graphics depicting passages of time. Easily one of the most graphically stunning games ever made, and one of the most unique. Recommended!

Note: The download here is full CD-ROM version, complete with video clips from David Lynch's movie based on the book, and full speech. You can also download the smaller disk version if you want :)

Dune was the first of many games made based on a "watered-down" version of the outstanding Dune novels by Frank Herbert. It is the year 10,191. The Known Universe revolves around one amazing and mysterious substance - the Spice Melange. The Spice enables those who use it to live up to two hundred years. It is also required for space travel. However, the Spice exists on only one planet in the entire universe: The planet Arrakis, also known as Dune.

You play the role of Paul Atreides, son of the Duke Leto, and heir to House Atreides. The Padishah Emperor Shaddam IV has ordered House Atreides to occupy the desert planet Arrakis (replacing the evil House Harkonnen) to mine the Spice from the desert sands. But your bitter rival, Baron Vladimir Harkonnen, wishes to crush House Atreides and retake Arrakis for himself. The Duke knows that a powerful ally lies with the Fremen, the natives of Arrakis, who have adapted to the harsh Arrakeen environment, including the massive sandworms, who attack all rhythmic vibrations in the desert. You are sent out to try and convince the Fremen to assist House Atreides in the Spice mining operations. And that's where your quest begins.

As a HUGE fan of the Dune novels and movie, I found this game to be very good. At first, your job is to rally the Fremen to mine the Spice, so that you can keep a steady flow of the precious substance to the Emperor. But as time passes, you'll need to equip and train them for battle, as the Harkonnens begin their attacks. The game also has a large adventure element to it. The graphics are very nice, considering it's age. As time passes in the game, the sun will set and rise. The adlib music is also very well done.

The only problem I have with this game is that it can get quite boring and repetitive after a while, as you search the desert for more Fremen to train, make sure you meet the Emperor's Spice quotas, and wait for the Harkonnen attacks to begin. Once they attack, the action picks up a bit, though. There are also some scripted sequences, which you can miss if you're not careful. The scripting of the characters isn't the greatest sometimes, either.

Overall, this game is well worth checking out, whether you're a fan of Dune or not. I definitely recommend it. LONG LIVE THE FIGHTERS!

One of the best strategy games of that time. Harvast spice with your Fremen and defeat the Harkonnen. The graphics are Superb! 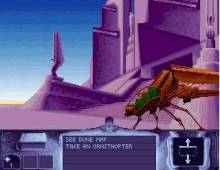 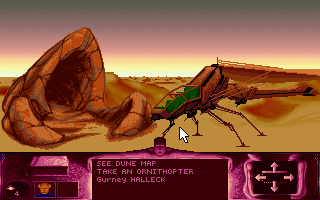