For those of you that don't know, civilization is a turn-based strategy game, created by Sid Meier's and published by Micro Prose. And although I would be the first to admit I am not exactly good at this game, it is still enjoyable to play once in a while. You are the leader of a new civilization, on a new world, your job, to own everyone else. You can accomplish this task in one of two ways, by destroying all the other civilizations or by winning the space race (which is accomplished by researching into technology and then building a space-ship before anyone else). Its not just as simple as that though, there can be up to 7 other civilizations on this planet and they all want the same thing you do, and will do anything they can to accomplish it.

You can choose from 14 different civilizations to begin with ranging from civilizations such as the Romans (Caesar), to the Indians (Mahatma Gandhi). Each civilization not only looks different, but also has diffident starting technologies. Technologies are what gets you going in this world :) you need to beef up your technologies by investing resource's into researching them (such as researching the wheel), and then investing resource's into developing them (such as making a horse drawn cart now you have the research for the wheel). Many technologies will require you to research into many different things, (see technologies flow chart). You can acquire additional resources by expanding your civilization, for example by sending settlers to create new towns. You can also expand your civilization by converting the land surrounding your towns into irrigated land. And create roads to and from your towns to speed up the units that travel along it. What really makes or breaks you in this game is your foreign policies, will you go for love, or war? You can create ambassadors to meet with other civilizations and forge alliances, give gifts or even ask to go to war with another civilizations, but as a warning, they will also do this to you :). One neat feature of this game is your palace, when you please your citizens, they will reward you by upgrading your palace, you can create quite a house. All in all, this is a game that everyone should try once, even if you aren't a fan of strategy games

I could write about this one all day long but I'll try to be short. This is definitely the best game ever made (actually, the only one that is better then Civ is Civ II). Ok, here's about the game: You start with a group of settlers that should be used to make Your first city. From this point You can build new units (military or settlers, and later even diplomatic), city improvements or wonders of the world. Spread Your civilization, encounter others, make contacts, sign peace agreements, go to war, destroy others and try not to be destroyed. Discover new advances and move from stone to nuclear age. Many different military units (from militia, legions and catapults to musketeers, ironclads, artillery and even nuclear bombs!), city improvements (such as temples, marketplaces, factories,...) and wonders of the world (Lighthouse of Alexandria, Great library, Hanging gardens, UN building,...) make Civ world huge and always new. Sid Meier is a genius and Civ is all-time game no.1!!!

It's 3000 B.C., dawn of civilization. Wait, which Civ do I wanna play? America? Aztec? Babylon? Chinese? Egypt? English? French? German? Greeks? Indian? Mongols? Romans? Russians? Zulu? Your choice. You can build up to 16 cities for each Civilization you decide to play and then build road to various luxuries to either aid you in battle or keep your population content. As your city grows, so will the need of the people living there. Do all that you can to keep them happy. Research temples early on and then work towards your military. The last thing you want is for your people to rebel. Also, you must be strategic in your research.

The needs of the people are indeed great, but your military may need work. And don't forget wonders! The Hanging Garden of Babylon, the Pyramids of Egypt...Wait, why should Egypt and Babylon get all the good stuff? Let's build the Pyramids in Boston, or the Gardens in Athens!

Once you have a substantial military, don't be afraid to use it; especially against those Civilization that beat you in building a wonder. Keep an eye out for who's the greatest threat. Make sure the answer to that is you at all times. Be careful though! Barbarians with no ties to any civilization can make your life miserable. And don't go on the rush too soon. Offense, without defense equals a dead Civilization.

There are two ways to beat the game: Space race (easiest) and conquest (harder, but better for your score). Whatever you decide to go for, this game has a lot of thought and depth. It is the quintessential strategy game! Download it for the ultimate strategy experience! I have owned every sequel this game has spawned and I'm currently enjoying Civilization 4: Warlords but they were all thanks to this game. Few strategies come close to Sid Meier's masterpiece and those that do, usually have it to thank. 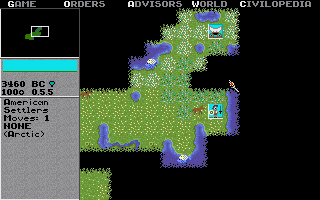