Railroad Tycoon Deluxe (RDX) is an excellent updated version of Sid Meier's classic Railroad Tycoon, a game of robber barons at the turn of 20th century. Despite a host of new features and graphics, RDX sold very poorly in stores, due to some annoying bugs and inexplicably slow gameplay (most notoriously the F4 map screen, which brings the game to a crawl).

RDX is essentially the same game as Railroad Tycoon, with improves hi-resolution graphics, new sound effects, and several additions. The additions are: new maps (South America and South Africa) with region-specific cargo types (e.g. diamonds for South Africa), new time ranges and locomotives, bandits who can hijack your trains, and sheriffs who will arrest them. The existence of many bugs and very slow speed make the game initially inferior to the original, but subsequent patches (already applied in this download) and today's faster computers make it well worth a look. With multiple difficulty level, ingenious user interface that makes track laying a breeze, and rock-solid gameplay, RDX is in my (biased) opinion THE best railroad business management games ever made... although SimTex' 1830 and Gathering of Developers' 1999 sequel Railroad Tycoon II come very close to this classic.

Note: Although the game is called Sid Meier's Railroad Tycoon Deluxe, Sid Meier himself had nothing to do with the development of this version.

This is a Sid Meier game and it's one of those that put this genius on the pedestal he is on now. Along with Pirates and Civilization this has got to be one of his best games. Off course there were many follow ups and clones of this game, but if you ask me, nothing, and I do mean nothing, comes close to this game!!!

So what's it about? You are an industrious and ambitious businessman trying your skill in railroad business. And this game really has it all. You can play on many different levels and I'll explain what I mean by that.

First off you chose the map on which you'll play. You can start building in either England, eastern part of North America, western part of North America or in continental Europe. Depending on which map you choose, you'll start in different years. England built its rail network first, so that map will take you in the first half of the 19th century. And the further back you go in time, less choices of engines you'll have.

Next you choose the difficulty level of AI. And this really does make a difference, because every level will get tougher. You have four to choose from and the toughest one will be almost impossible to beat!

But that's not all. Each difficulty level presumes you'll chose different reality levels, but you can modify those at the beginning or during the game. What's a reality level? You can chose to do your own dispatching (holding the trains on the station, forcing them to wait, so they don't crash), having complex economy (if you don't chose this one, every city will accept all goods you'll deliver to them, if you chose this one, then you'll get a list of goods a certain city or some industry not placed in a city will accept), and last but not least is the cut-throat choice (if ticked then other tycoons will try to get you out of business by taking over your lines). So you have many choices from the beginning on and that certainly adds to re-playability.

But what do you do in the game? Well there are many things you can do. The basic income is from the profit your railroad is making, but that's by far not all. You can buy and sell stocks of other companies, speculating with their stock. Running others out of business or taking over their lines. You can expand the stations by building post offices, hotels, restaurants,… which can bring some money and increase the number of passengers and mail (and also freight). You'll see some priority deliveries that will show up random and will demand you to howl freight from one station to another (earning extra money). Basically you must connect as many cities as you can and build as much industry (unless playing without complex economy) as you can. Don't forget to build some maintenance facilities along the way, so trains don't give out on you.

There are also two ways of fighting the opponents. You can either try to take over their business or disrupt their lines. The stock market depends on your wealth. If you have enough money, you'll be able to buy more then 50% of their stocks and take over their company. But disrupting their lines depends on your railroad building skills. If you connect your railroad to a city that is a part of somebody else's net then this city will decide for one of the companies. Their decision will be based on performance. The one who can bring most goods and passengers to the city and deliver most of their supplies to other cities will win. The looser will have to redraw from the city. This can even cut a line in half. On the other hand if you connect to a city owned by a company you took over that will increase the net worth of your company.

There are simply so many things to say about this game, that I could go on for pages and still wouldn't say enough. The game play would score a 10 on a scale from 1 to 5. The game play gives you 200% of everything. But what about the graphics and the sound? Well they are good too! The sound consists of a pleasant adlib tunes and some sound effects. There are also some animated scenes that are quite funny. You get VGA graphics that more then effectively do the job.

I'll only mention one other thing (for everything else read the MANUAL). You build by holding down shift and using the numeric part of the keyboard. Function keys from F1 to F10 all have a certain function. First 4 will zoom in and out on parts of the map; others will bring out different reports. F9 will get you in touch with the stock broker.

In the end, when you either retire, are kicked out of business or have been in charge of the company so long you'll go into peaceful retreat you'll see how good you've done. Every time you really improve your performance you're offered a better job (meaning if you left the railroad business you would have all the qualifications to do that job). It's a nice way to end a game and enter the hall of fame.

The Rail Road Tycoon Deluxe Game is a classic that I believe is one of the timeless games, in PC history. I played the game when I was a child and still enjoy playing it today. I remember many times I have failed to attempt to make a rail road and couldn't make it. I really didn't finish it until I was an middle age teenager.

It is definitely one the funniest games ever made and to play. The graphics are simple but the history on the game make up for its lack of high detailed graphics. Its really colorful and is pretty good graphics. It is one game that has stood the test of time, and I will always be a number one top player. Even though it is out dated and often overshadowed by more modern games it remains a playable classic.

It is outstandingly realistic in the telling showing how hard it could be to actually make a rail road track. It is true in the fact that many people had a hard and challenging life working on the rail roads; this true to life bluntness makes it outstanding in realism as far as reality is concerned on how hard some jobs can be at certain times.

And you can talk to the rest of the people that have played this game and they will probably have had like it and enjoyed it as much as I have. It also gives the game more realism as it shows the working on the rail road and trying to get it done and be successful in doing this all at the same time. This can help educate people on how you must work in order to make money and be successful.

The more you build on to the rail road the more money it cost but if people like it and travel it then you get a lot more money in return to build on and on to the rail road track. This might seem hard and can be hard at times but this game rocked my socks off. I would play this game over and over again if I had the time of day to do it and I would recommend this game to any one because I am sure if you play it you will enjoy this game as much as I did when I sat for hours playing it.

It is a fun game to play that will bring you hours of enjoyment and sometimes frustration. I will tell you right now it is not easy to survive the trail, as it was in real life no doubt. I recommend it very highly, have fun and enjoy. 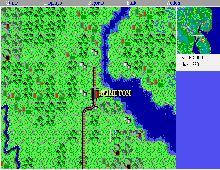