Populous II: Trials of the Olympian Gods is a great sequel to one of the most unique computer games ever made. It was unfortunately not as successful, although every aspect of the game has been improved and various gameplay features added to make it a deeper game. In contrast to some unnamed god you play in the original Populous, in the sequel you actually are a god-- the son or daughter of Zeus, no less. Your task is to win a place for yourself in the pantheon by getting your worshippers to take on and beat the followers of the other gods. All in a day's work.

That Populous II isn't just a prettier Populous is obvious from the start: different points can be allocated to different elements to make your character more or less powerful in that area. For example, if you want your god to be a fire god (handy when fighting Neptune), you can give him/her more points in "fire" element. You will then get powerful fire effects (e.g. meteor shower and volcano) to wreck havoc on your opponents' followers much quicker than effects in other elements.

As in the first game, you must use supernatural powers to help your followers defeat the enemies. Your powers, as in Populous are what makes the game a lot of fun: in addition to old favorites such as tidal waves and volcano, there are many more creative ones such as baptismal fonts which turn enemy people into your followers (on the downside, these converts can change back into the enemies when they fall into it the second time!) The bigger the effect, the more mana you must have. Mana comes from your followers: the more followers you have, the more mana they give you. If you have enough mana, you can also summon famous Greek heroes such as Perseus and Theseus to help rally the people--- and burn down enemy houses in a hurry.

The great fun in Populous II is the little tricks you will learn as you play. If the enemy is on a holy pilgrimage, for example, rather than trying to kill them directly you can plant a swamp in their way and watch them march to their deaths. You can plant trees all throughout the enemy land and then throw a match to it and watch an entire enemy city burn in one giant conflagration. Planning, timing, and dexterity are all required for success, as well as quick anticipation of your enemy's strategy. Each of your opponent is introduced before the battle begins, and they do follow their legendary traits (e.g. if you fight Neptune, expect to see a lot of water effects) -- so playing the game is also a good way to bone up on your Greek mythology :) To round off this gem, there are random maps, multiplayer options, and practice mode where you can learn the game's mechanics. Even today, you won't likely find a better god game anywhere. Highly recommended!

Bullfrog Productions is one of my favorite programmers. I loved Dungeon Keeper; I loved the Magic Carpet series; I love the Populous series. Trials of the Olympian Gods is the direct sequel to the original. The user plays an omniscient god-like role in the games, and helps the people, his followers, to survive and fight other peoples who follow an enemy god.

This installment of the game is directly set in ancient Greek myth, whereas the first one only alluded to the presence of gods. The user actually plays the part of one of Zeus's illegitimate children with a mortal woman. The user has to battle his brethren, one at a time, until he finally faces his father and Zeus's followers in a scenario. If the user is able to survive these battles, his father has promised to let him into the Pantheon to sit amongst the gods.

Populous II has a total of twenty-nine divine effects, twenty-one more than the last game. These are divided into the six categories of earth, wind, water fire, human and plant life. There are individual strength meters within each category. The hero effect is still present in this installment of the game, allowing the user to turn one of his followers into a legendary Greek hero to champion the cause of each individual effects, making a total of six heroes. When the user wins a battle, he is given some experience points…up to six points…which he can use to boost his strength in each category.

The user accomplishes the goal of winning each scenario against each demi-god opponent by controlling his followers and making them situations where they can procreate and improve their civilizations. The better the situation, the better the user's people will be armed. People dwelling in tents will be able to procreate very quickly, but they are very weak and poorly armed. People living in castles will take a long time to procreate, but they will be much more powerful and worthy in battle.

In short, this is a fairly standard strategy game, but the advent of the god-like role adds a very fun element that the user can really play with. The user also has a campaign-like goal, as opposed to just building a great civilization and conquering everything around him. He has to defeat many other enemy gods and their populations in an effort to get into Olympus. It's a great fun play. 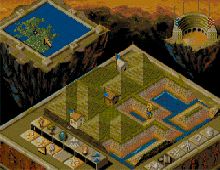