One of the best action strategy games I have ever played. The game takes place in the future where the world are dominated by several different syndicates. Of course you are a leader in one of them and it is your job to fulfill as many missions as possible.

Each mission have it's own story which means things like assassination, persuasion, blow up buildings and much more. You can control up to 4 agents at a time. Each agent can be equipped with one weapons including an Uzi and a minigun. You can also research in better weapons and armor.

Finally great graphics and sounds are included. This version includes a lot of new great things like bombs which means you can blow up whole buildings and much more.

Released 3 years after its classic cyberpunk predecessor, Syndicate Wars continues the story that began in Syndicate, with significant improvements all around. From the ashes of the syndicates destroyed in the first game emerged the ultimate victor, EuroCorp. The world is now firmly nestled in EuroCorp's grasp - but a technologically superior religious sect hopes to undermine their authority through a powerful computer virus. You will assume the role of either a EuroCorp Executive, or a Church of the New Epoch High Disciple in Syndicate Wars, and once again lead a team of cyborgs to victory.

Syndicate Wars plays not unlike the original real-time action strategy game, in that you command a team of four heavily armed cyborg enforcers in an isometric cityscape to perform any number of violent assignments. Gameplay, however, is much more action-oriented and disorienting this time around. Your aerial vantage point can be rotated smoothly at will, an attractive feature that may quickly become frustrating. Enemy agents have a habit of attacking from where you cannot see them, and before you can swivel the map to get a good look at the assailants you'll find your minions heavily wounded or worse. The Deep Radar option helps a great deal by making any visually obstructive foreground architecture semi-transparent. Since ammunition is no longer scarce (each weapon is energy-based and requires mere moments to recharge itself), Syndicate Wars allows for a generous use of fatal force, in contrast to the original's more conservative approach to the killing.

Overall, Syndicate Wars succeeds in recapturing the dark, deadly emotion of the original, and adding to it a huge variety of weapons and scenarios, and refurbishes it with a gorgeous new coat of paint. Over five dozen missions and multiplayer support ensure Syndicate Wars high replay value. However, it plays closer to an action game than an action/strategic mix of the original, a fact which will likely disappoint fans of the original who like Syndicate for its mix of elements from many genres. Overall, it's still a Top Dog, and a must play for all fans of action games, but strategy fans won't find much that they will like in this follow-up... which is why the game is classified as an "Action" game here. A great game, though not the classic that its predecessor was.

In the future, the world is controlled by a handfull of global corporations (syndicates). You are the Marketing director (hit man) for one of these compaies. It is your job to take control away from the competitors. The job is not one of diplomacy, but one of brute force and physical control. Advance your way to the top of the corporation by sucessfully completing your missions and managing the money you make from your territories.

After the great Syndicate and American Revolt, Bullfrog was really dealing with a huge fan community (for the time anyway) and Syndicate Wars was expected as some kind of grail for gamers. It took for ever to complete and every time we caught glipses of the coming sequel, we would jump in the air, eager to get our hands on the beast.

Syndicate and Wars, which is our concern here, are two games where you control a team of cyborg agents and have to complete various objectives like killing the enemies' agents, converting people to your cause, killing cops, retrieving stuff, assassinate someone... Your ultimate goal is to take over the entire world and you do it region by region (country by country but one is called Europe, so it is not that detailed geographically). You have a squad of 4 guys and you can equip them before every mission. The more mission you complete, the more money you get for better equipment and better upgrades for you cyborgs.

Historically, Syndicate is one of the very first strategy/action games, it was in real time, you can in some measure, chose your next mission, you can research new upgrades for your agents' arms, legs... You can virtually do anything you wanted in this game, convert normal citizen to your cause (they would pick up weapons from dead bodies and help you, drive vehicles (only on the street though) and even convert your enemies to your side (my personal favourite).

Syndicate wars take all the good stuff from the previous one and expand on it. How? By integrating true 3d environment, you can rotate the world and see hidden enemies, you can turn the camera in any direction and control the battlefield perfectly. One problem is that the camera is not handled very well, it gets stuck behind buildings and when you turn around, you get stuck inside or behind buildings sometimes and cannot see anything.

Otherwise, the system is pretty much the same but the enemies are way more dangerous and clever (not very bright, but not as suicidal as they used to be in the first one). In this game, you'll have to plan carefully your mission right from mission 1 or it's going to be game over immediately. The difficulty is very hard, herder than the first game's expansion, which was already considered as a joke for its difficulty level.

As for sound, I really cannot say for I never had the chance to play it with the sound, I did not have a sound card at the time and played the abandonware version the same way.

If it is so hard, and if the gameplay suffers from camera problems, why play this game? Because it's absolutely gorgeous for the time! It's in full 3d for the maps, destructible objects all over the place and real intense action all the way through. For anyone who likes UFO but is frustrated by the turn based combat, for anyone who enjoys squad based games and action shooter, this is a MUST TRY. You might not get into it, the camera might curse your experience and the game might just not look so good today, I guarantee that if you do get over the hard start, you'll want to play that game till the end and will find how deep it is. 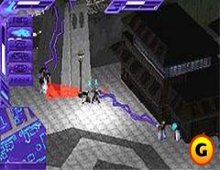