In this game you run a syndicate and your goal is to take over the world. Each level you enter with four of your androids which you will equip with the best weapons and other stuff you have. A level consist of a 'small' town in which you have to do an assigment. Rescue a doctor, kill other syndicates and more. You earn money from countries you've taken over (you can control taxes). With the money you'll have you do research on weapons, equipment and armour.

Syndicate is an outstanding, incredibly atmospheric action-strategy game by Bullfrog, one of the best of its kind. The game is set in a bleak future where "Syndicates" control the world. You're a young executive in a small European based syndicate, you must perform a series of tasks to subdue the major population centres one by one until you have driven the forces of the rival corporations out of their final strongholds.

What makes Syndicate stand out from other real-time strategy games is the combination great gameplay and unmatched immersion that never gets boring. The game mixes elements of business management, strategy and action into one very addicting package. Missions are carried out by up to four agents, any or all of whom can be controlled by you through use of the "CHIP" technology. Each agent has his or her own stats, which can be improved via implementing cybernetic attachments, which in turn must be researched using funds you collect from winning a mission. One of the game's best feature is the ability to adjust the stats of your agents. Since they are not real humans but cyborgs, the agents' Intelligence, Perception, and Adrenalin levels can be artificially boosted by drugs at any time to suit your tactics. You will often boost an agent's attribute to the level you prefer, and then leave him to fend for himself - the agent will then react with pinpoint accuracy to any threats, and run away if necessary. Of course, as with real-life drugs, there is a downside. After a sustained period of exposure to the drug, the body's tolerance increases, and the net effect of the drug increases - more is needed to achieve the same effects as before (diminishing marginal utility, one might say). This simulation of drug addiction is very well implemented, and adds a great dimension to gameplay.

Although most of the missions are of the "kill all enemies" type, there are many different objectives that keep the game afresh: you will subdue the local resistance, capture VIPs, or even use a persuadertron on someone. Speaking of persuadertron: this is a good example of how unique and deep Syndicate is. Not quite a weapon, the persuadertron allows you to persuade others to your side-- anyone falling under the influence of the persuadertron will follow the agent who carries it, powerless to resist. Normal citizens can be "persuaded" instantly, while guards, police and members of opposing syndicates require that a number of civilians are persuaded first before the persuadertron will work on them.

Played from a excellent isometric pseudo 3D perspective, Syndicate was a graphic tour de force for its time. Busy streets are filled pedestrians, vehicles and enemy agents. Digital street signs advertise the latest products as your agents battle it out with the forces of the enemy beneath. Buildings can be entered, cars driven around (and used to splatter enemies), and occasional parts of the environment can be ignited. With incredible atmosphere, solid gameplay, and high replayability, Syndicate is Peter Molyneux' masterpiece and one of the best games ever made. A must-have, especially for all cyberpunk fans. Highly recommended!

The storyline of Syndicate brings us to the future. You are in control of a powerfull syndicate which you will have to use to conquer the world. Every level, you control 4 androids who are equipped (by you) with the toughest and most mean machines such as flamers, machine guns, rocket launcher and more. As you advance through the levels, you will get more brutal weapons, speed and armor up your andrios. This game consists of alot of blood and violence, which back at 1993 was something not seen so frequently, which made the spotlight on this game ever greater. 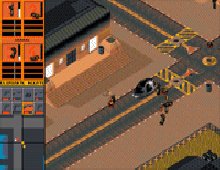 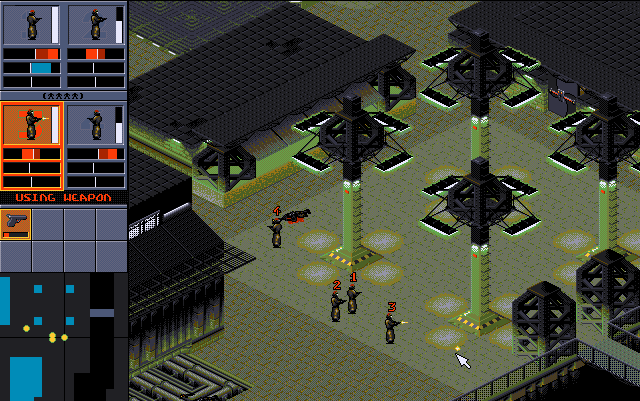