In my opinion the best game in The Settlers series, The Settlers II Gold Edition is a great compilation of the original Settlers II and the Mission Pack add-on. Arguably one of the best-looking, addictive, and user-friendly games in the build-and-conquer genre, Settlers II sports enhancements that increases the fun of Settlers (released as Serf City: Life is Feudal in the US by SSI) roughly tenfold, while sporting none of the obtuse interface that makes Settlers III more frustrating than fun, or the disappointingly narrow focus of Settlers IV.

Although it may look just like any other real-time strategy game, the beauty of Settlers II lies in the excellent dynamic relationships between various units/buildings that make the economy hum, as well as the intuitive user interface and attractive cartoon graphics. You start the game with a castle and a small tract of land. You then have to grow a balanced economy to finance military-driven expansion efforts. Your first task will be to find and cultivate raw materials such as wood and stone. Buried natural resources (iron ore, coal, granite, and gold) can be located by sending a geologist to survey the hills. Raw materials are then processed in the logical order that will be familiar to anyone who has played a real-time strategy game. For instance, iron ore is combined with coal in the smelter to produce iron, which can then be used to produce weapons (in the armory) or tools (in the metalworks). But in order to transform raw materials into usable goods, you need workers. Which means they need to be fed to work efficiently, which means you need to build farms and fisheries in the right spots. And that's not enough - workers need to have clear routes between locations they work for, and the distances between buildings determine the time it takes to produce goods. This means that the layout of the town must be carefully planned - and this is one of the most enjoyable aspects of Settlers II. All associated buildings are best constructed within close proximity of each other to form loose "zones"; for example, sawmills should be built close to forests, corn farms should be close to a mill, bakery, and pig farm. It is very satisfying to see your workers going on their businesses from point A to B briskly and directly, without any traffic jams or detours. All of this is presented in excellent SVGA graphics that really convey both the pace of your empire's economic development, as well as the designers' sense of humor.

In Settlers II, Blue Byte manages to craft a superb, maddeningly addictive strategy game that hides its complexity behind an excellent user interface. If there is any problem with the game, it probably lies with the lack of long-term goal which also plagues its predecessor. After the first few maps, city development becomes more of a chore with no surprises. The addition of a plot and campaign mode would have made Settlers II a much more replayable game, as well as adding technologies you can research (flying machines, for example, would be neat). As it stands, though, The Settlers II Gold Edition is a wonderful gaming experience you wouldn't want to miss. Highly recommended!

The Settlers 2 is an advanced edition of the original Settlers with much more buildings, workers, products, and soldiers available.

You start your settlement with only one main building. To build any other buildings, you first must find a source for stones and wood. So you start to build little roads where your men transport all the different goods along. There exist more than 30 different professions your men can have, and many different building types. Of course, there are other settlers in your area, too, so war is unavoidable. The graphic is Super-VGA, enjoy! 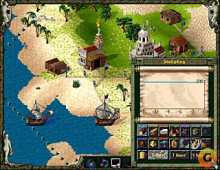 People who downloaded this game have also downloaded:
Settlers, The (a.k.a. Serf City: Life is Feudal), Populous 2, Syndicate Wars, Lords of The Realm 2