Lords of The Realm 2

One of the most underrated strategy games of all time, Impressions' Lords of the Realm II is in my opinion the best game designed by David Lester, prolific designer and founder of Impressions. This mediaval empire game improves on the already superb Lords of the Realm in numerous aspects, adding both complexity and replayability.

Your objective in LOTRII remains the same as it was in the first game: The king in mediaval England is dead, and it's up to you to fight the other nobles for the throne and succeed him. Again like the first game, you are put in charge of both the strategic level (i.e. making decisions for your entire kingdom), and tactical (i.e. taking control of troops in combat) - although you can have the computer handle the combat for you. At the strategic level, you view the action from the attractive isometric map, where you can move armies, adjust economic parameters, manage your resources, and engage in diplomacy with other noble houses. As in the first game, your success in the game hinges on proper resource allocation and maximizing farm output. Each county in your empire has a fixed amount of arable land, which you can use for farming wheat or raising cattle to feed your peasants. Sufficiency in, or surplus of, food supply helps increase population, which in turn will increase taxes and the size of your army (recruited from peasants). Some peasants must also be assigned to gather other useful resources, build castles, and produce weapons of war. You can also hire mercenaries at the mercenary guild, but they are costly and not always co-operative.

When armies clash, the game switches to a tactical real-time battle mode, which looks similar to Mindcraft's Siege series, and is quite fun to play. Armies consist of peasants, archers, macemen, swordsman, crossbow troops, pikemen, and knights. Each type of troop has its own strengths and weaknesses, although an army of knights usually is practically invincible. What should prove more interesting to an armchair commander than simplistic open-field battles are the sieges, because you must decide how many siege engines, catapults, and battering rams to use, and where to position them. The computer players are reasonably challenging - they are very easy to beat in the first turns of the game, but become worthy opponents in the later stages. Advanced options such as a hidden map, advanced farming and army foraging, and others make the game more complex, and help increase the replay value.

In addition to the standard campaign play, LOTRII includes a nice custom scenario builder and a few multiplayer modes including DirectPlay support. On the downside, there is no variety in terms of victory conditions -you simply must conquer every county to win. This rigid condition, coupled with the level of micromanagement required for each county in the later stages, makes the game tiresome toward the end (especially when you are clearly going to win, but must first tolerate the tedious process of crushing the last counties of the last enemy). Also, more castle types would have been nice (although you get those in the Siege Pack add-on).

All in all, LOTRII will please fans of the first game, as well as anyone who likes turn-based/real-time gameplay based in the medieval period. The game is not very original, but it is still a lot of fun and surprisingly replayable. Highly recommended to anyone who likes strategy games.

Lords of the Realm is the sequel to the first game in the series, where you play one of the nobles of England.

As the game begins, the king has died and 5 nobles (including yourself) are vying for control of the realm, including the noble Baron, the headstrong Knight, the ice princess The Countess, and the backstabbing Bishop. You have to hold on to your counties by building larger castles and keeping the peasantry happy and well-fed.

Lords of the Realm 2 is a medieval strategy game. The King is dead and the nobles are all vying for power to become the next King. The game has a simple interface. The controls and play system are easy to learn and not difficult to master. The player must be adept at managing economies, leading armies on the battlefield, and also be a diplomat as well, trying to play all ends against the middle to buy yourself time to become strong. I would stack this game up to and recent strategy game.

While the graphics are not spectacular by any stretch of the imagination they convey the mood of the game very well and suit its purpose. The cut scenes are well done and the mixes of units with which the player can fight are also well balanced and leave plenty of room for all those crafty tacticians out there. Managing the economy is an equal challenge as the player must raise army's, keep populations happy, build weapons and castles, and make money to expand their empire. The game is played in turns called seasons. Every season the player makes turn based decision on economy and military management as well as planning the next campaign. When two opposing armies cross paths however the game goes into a real time tactical game of last man standing.

The AI is good for its time but with a little effort and practice the player should not have too many difficulties. The different opponents are very different from each other as well. One is a backstabber, one is a tyrant, one is a mix of the two, and one is in a category all his own. Each of the AI players will act and react differently to gifts, compliments, insults, invasions, and other interactions. As far as multiplayer is concerned the real time battles are better done with the lord of the realm 2 siege pack expansion pack. This will allow players to concentrate on real time battle although it does offer the tradition game new maps to conquer. To sum it up Lords of the Realm 2 s not only a worthy successor to the first game but is infinitely better than its successor.

This is a game that a real time strategy or military minded person should not be without. It is a great game for both newcomers and more skilled players. 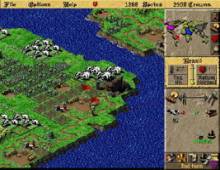 Lords of The Realm 2 screenshot

People who downloaded this game have also downloaded:
Lords of the Realm 2: Siege Pack, Lords of The Realm, Lords of Magic: Special Edition, Settlers II Gold Edition, The, Magic: The Gathering