Lords of The Realm

David Lester's masterpiece and definitely THE game that finally brought Impressions into the spotlight, Lords of The Realms is a great medieval strategy game that strikes a great balance between combat and empire building. As veteran wargamers M. Evan Brooks observes, "...[the game] offers an interesting portrayal of thirteenth century politics and military maneuver. The "3-Cs" of medievalism are covered: castle construction, crop rotation, and combat. Think of it as a cross between Kingdoms of Germany and Castles II, but with more depth."

What makes the game very addictive is, first and foremost, the fact that it finally broke away from the notorious "spreadsheet-style" syndrome that most previous Impressions titles share. Although it still crunches a lot of numbers, and you will still keep track of many more statistics than you care to count, Lords of The Realms presents these statistics visually: you will see the graphical effects of all your orders (e.g. troops marching to their destinations), and seasonal changes (wheat stalks blow in the summer wind, and wilt with the onset of winter). The AI is quite competent, and there are many nice historical tidbits in the game, including the simple but effective diplomacy model, to entertain both die-hard and casual gamers. Similar to Kou Shibusawa's Nobunaga's Ambition, Lester's Lords of The Realm is not only a labor of love, but a highly personal game where the designer's genuine interest in his country's heritage are fully borne by the game's excellence. It's unfortunate that Lords of The Realm II is not even half as fun as this charming, addictive strategy game. Highly recommended, especially to anyone who's interested in medieval history, and fans of Defender of The Crown who want more substance and accuracy in the game. 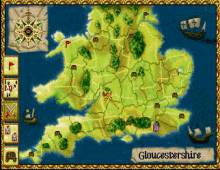 Lords of The Realm screenshot

People who downloaded this game have also downloaded:
Lords of The Realm 2, Lords of the Realm 2: Siege Pack, Lords of Magic: Special Edition, Master of Orion, Settlers II Gold Edition, The