Lords of the Realm 2: Siege Pack

An excellent expansion pack to one of the best medieval strategy games ever made, Siege Pack adds a lot of new scenarios and options to Impression's classic Lords of the Realm II. Read our review elsewhere on this site to find how great LOTRII is :)

Siege Pack adds much more to the game than new maps. Among the additions are: a more challenging AI, a custom series of games, 20 new maps, a map editor, faster Internet support, Skirmish Mode, sieges with 10 new castle designs, as well as enhanced diplomacy and more random events.

The designers turned the difficulty up a notch for the new campaign, making it very challenging for LOTRII veterans. In addition to new (and much improved) random events such as embezzling, there is a new terrain feature in battle maps: a pitch, which can be set aflame, adding a strategic angle to battles. But the best feature in SP is the Skirmish Mode. In this mode, you can choose either open field battles or castle sieges, then play the battles with a computer-generated army or your own composition. You can customize skirmishes, and even build battle maps using the intuitive map editor. Unfortunately, you cannot design new castles or strategic-level maps, making it impossible to create new campaigns.

Siege Pack adds more of what made LOTRII a classic, and new elements that will make it worthwhile for every strategy fan to visit medieval Europe. If only more expansion packs today give as much bang for your buck.

Lords of the realm expansion siege pack is a great turn based game. The expansion adds a new campaign and several maps.

It also fixes several glitches and improved the computer player to make the game more challenging. It also added a skirmish map editor where you can create your own battle maps to play. Although it sounds simple enough-conquer thy neighbors-there are many challenges ahead of you. Each turn you must make choices. Your people must eat. Do you feed them cows or grain? How many people do you need to mind the fields? You will lose fields through bad weather and enemy armies trampling on them, and it takes more of your townsfolk to restore them. Then you have to think about your resources. Your town will have from 0 to 2 of these resources-wood, stone, and ore. Then you have your blacksmith, where you make your weapons. In order to have enough townsfolk you must make them happy. Feed them well. Don't tax

them to much. There will also be events after each turn that might effect them such as getting the black death.

You can also build up a castle and garrison with troops to make it much harder to capture your town. As your population grows you can build an army. You can also hire mercenaries when they show up at your town. You are now ready to go conquer new lands. You want one with new resources. If you have wood and ore, look for one that has stone. Just remember it must be next to yours or it will be too far to govern. You will want to build up your new lands. You can send supplies between your lands, you can also destroy enemy supplies, but they can also destroy yours.

You can build your armies with up to 1500 men with only one set of mercenaries. You will want lots of bows but a well balanced army will do you well. There are swordsmen, knights, crossbows, pikes, and maces to go with the bows. When you siege a castle you must decide how many war machines you want to build. You can build up to four catapults, three siege towers, and two battering rams. It will depend on how large your army is on how many turns it will take

to build them. A close to full 1500 man army will take two turns to build them all. The battles are also fun but you don't have to take the field. Overall this is a great game and worth a try. 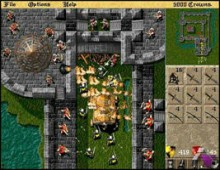