After disappointing fans of X-COM (or UFO: Enemy Unknown in Europe) with Terrors from The Deep, the uninspired sequel that should have been sold as an add-on, Julian Gollop and his team at Mythos Games brought the series back to life with X-COM: The Apocalypse, a game worthy of X-COM name. At first glance, X-COM veterans have reasons to be skeptical. For starters, a cliché plot (war with the aliens have increased pollution and left many cities in ruins) explains the reduced game scale from the whole world to only one city, Mega-Primus, mankind's last hope of survival. As commander of the X-Com Mega-Primus Chapter, it is your job to command the city's army of planes, cars, hovercraft, and ground troops to defend the city against the aliens. In another risky twist to the tried-and-true formula, X-COM's elegant turn-based tactical gameplay has been replaced with real-time combat. Although the option to play turn-based style is still around, it just doesn't have the same feel as the original. This change alone is enough to convince many X-COM fans to never give Apocalypse a chance. Those creepy night missions that give you the adrenaline rush when seeing the Sectoid's eyes glow in the dark are also gone, as Apocalypse has no night-day cycle, thereby making all missions occur in broad daylight.

Fortunately, it only takes the first tactical battle to convince X-COM fans that the incredible addictiveness of the first classic is still here, if not greatly enhanced by SVGA graphics and even more creative alien technologies and weapons to research. Basic gameplay is still the same as in the previous two games: you buy and invent new weapons to equip your soldiers with. When a UFO is discovered, you try to shoot it down with your fighters. After that, you send a transport vehicle with a soldier team to the crash site and kill all aliens in either the familiar turn-based or new real-time mode, StarCraft style. During the battles, you must be careful not to harm civilians who seem to always run in your way. So far, it's all familiar territory to X-COM veterans who will have no trouble learning the controls and jumping right into battles with ever opening the manual.

But what makes Apocalypse a true sequel (albeit an evolutionary one) rather than an add-on like Terror from The Deep is the numerous new gameplay elements that add extra dimensions to the already solid tactical combat engine. Gone are the tile-based cities in X-COM which look identical to one another except for the layout. In Mega-Primus, you will wage wars in burned-out slums, shiny corporate headquarters, frail glass-encased farms, factories, crowded apartments, and of course the enormous smoldering wreckage of a crashed UFO. The city also lives and breathes. If you want to hire new scientists, you now have to wait for the taxis to drive them to your base. When buying guns, you have to make sure no one ambushes the transport from the Megapol factory. Instead of governments, you deal with cyberpunk-style mega-corporations who sell you the equipment you need. Annoy them, and your supply line will be cut short before you know it.

In real-time mode, the combat is naturally faster and more frantic, and also a lot of fun. While it doesn't give you the chance to execute that well-timed master plan like the turn-based mode does, the furious fun of real-time combat will lure even die-hard X-COM fans to try it out at least a few times. With the return of X-COM's solid gameplay and many new features that make the game even more fun, X-COM: Apocalypse is a must have. It's a high point in the uneven series that saw the last game, X-COM Interceptor, turn out as little more than a glorified shooter.

It is often times difficult for a game to follow up with a strong continuation especially so when the previous games were all outstanding. The XCOM franchise has been one of the most successful franchises of all time. In fact it redefined an entire genre back in its day. The original premise behind the game is that the Earth gets invaded by aliens that have every intention of eliminating human kind. In answer to this distress, the earth governments decide to build a united front to combat this situation. This is where the player comes in. As the commander of an elite global force, it is your responsibility to battle the encroaching invaders. Of course this means shooting alien ships out of the sky, and then sending in your squad of specialists to do one on one battle with them o capture their technology and resources. This then allowed a player to manage a global aspect of the battle, as well as research and base management.

Following on the trails of two previous titles before it, XCOM Apocalypse tries to combine the lessons learned from its predecessors and add some new concepts to it as well. First the story has changed significantly from the Earth just simply being invaded. In Apocalypse the majority of the world has been destroyed, and the few residents of the world now live in massive mega cities. The player is the commander of one of these mega cities and is trying to battle a new threat that is invading the world. The new threat however is not from space or from the deep blue sea, rather this time the enemy is coming from a new dimension, literally. These new creatures have discovered a way to tunnel into our world and are now trying to make Earth their new home. As the XCOM commander the player is responsible for fighting these creatures in the air and well as on the ground. This means the acquisition of the right personnel and equipment needed to battle these freaks of nature. And believe me, some of these creatures look more like an irradiated mutant than an alien.

As before the players selects a site for their bases and begins to construct underground facilities that will be used in the capture and research of alien technologies. This also involves the reverse engineering of many of the devices used by the aliens, and then eventually will be used against them. Acquiring new technologies generally comes via combat missions undertaken by your fearless crew of soldiers. When UFO terror mission pops up, or UFO has been shot down your people are sent in to clean up the mess. This of course means commanding your squad in either turn based or real time combat until all your squad members are dead or the aliens are wiped out. The combat itself is one of the better aspects of this game, as this instalment of the series is the first to offer a choice between real-time and turn-based combat options. The predecessors to Apocalypse only offered the user turn based combat.

Once combat has been concluded all the equipment and technology onsite is retrieved by your squad and returned to base. This is where the other aspects of the game kick in. From this venue the user dedicates people to the various research projects they want to start on, as well as the purchasing of new equipment, or once the alien tech can be replicated the manufacturing of new equipment. Overall the choices of devices if varied and in some form the design is intriguing. Some may however find the style of a 1950's imagined futuristic city to be a bit cliché. The graphics are somewhat of an improvement over what we have seen with XCOM and XCOM 2, and this time there are actual cut scenes that try to show what is going on with the story. But there are still areas where the game could have used some polishing. For one thing the premise is very good behind it all, in terms of branching into a new direction not done before. However the dynamics of the weapons and the vehicles is a bit awkward and can be sometimes confusing; however overall the user will find enough good in the game to make it a good download off the web. 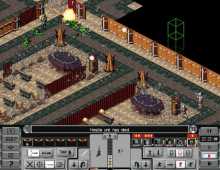