X-COM and its sequel Terror from the Deep are two veritable strategy masterpieces that need no introduction. Massively popular and deservedly so, the only reason you find them here on this site (which is supposed to focus on games) is that this is the by-now-hard-to-find native Windows 95 version, first released as part of X-COM Collector's Edition in 1998 :) If you have never played Terror from the Deep, you can find plenty of mostly positive reviews, including this review at GameSpot, about the game. I personally find it to be disappointing - I was expecting more innovation and features, and instead got an exact same game as X-COM, except much more difficult. Mythos took the "if it ain't broke, don't fix it" precept a bit too far, although since the original game was so addictive you can't help being hooked with this one too ;)

"Following in the footsteps of X-COM UFO Defense is no easy task. A modern classic of strategy war gaming, the original X-COM combined an amazing turn-based battle engine with a complex resource management system to become one of the most addictive and innovative games of the last few years.

Relocating the battle from outer space to inner space, X-COM Terror from the Deep creates a scenario where a long-dormant alien race is awakening from the ocean depths. Once again you must take command of the X-COM troops, leading them through battle and managing ever decreasing funds to improve your facilities. Everything that made the first X-COM such a success is still present in Terror from the Deep, but very little has been added to the formula.

Apart from new art and a handful of new combat options, this is exactly the same game as UFO Defense, only much more difficult. The story follows an identical pattern, ensuring that discoveries and important events are easily predicted by X-COM vets. Even though the "new" alien races and weapon technologies may appear different at first, it gradually becomes apparent that they're the same races and technologies, with new names and new faces.

This rehash leads to some logical errors which are difficult to overcome, especially considering the new aquatic locale. Even though most of the missions take place underwater, you can toss grenades around with ease, and you must develop special suits to allow your soldiers to move vertically (apparently the X-COM training camp doesn't including a swimming class).

Anomalies aside, Terror from the Deep is still a great game, but it seems more like an add-on than a bona-fide sequel. Fans of UFO Defense will find a pleasurable challenge in the cagier alien artificial intelligence, but interested newcomers are likely to find much more pleasure in the original."

The story so far. Earth is once again at peace after fighting off the aliens and defeating their base on Mars, but prior to the final defeat a signal shots out from Mars into the depths of Earth's oceans. SOMETHING begins to stir. Reports come in of missing ships, and once again strange objects are detected. Scramble all X-Com craft!!!

X-Com Terror From The Deep was the sequel to Microprose's successful UFO Enemy Unknown. Basically the game is the same as UFO with small squad tactics being the main thrust of the game, but this time with most of the action underwater. You start the game as the X-com Commander with one base with limited facilities, a squad of men with basic weapons, two strike vehicles and one troop carrier. You also have scientific teams and mechanical teams who give a set output unlike your troopers whose stats can change after undergoing missions. All of your funding comes from the various governments who increase and decrease their donations on their perspective of how you are defending them. Fortunately the game starts at a speed that gives you a chance as the first Ufo's you encounter you have a chance of taking out. The basic format of the game is thus. Detect a UFO, dispatch a strike fighter to disable it. Once it crash lands load a strike squad into the transport, land at crash site, kill or capture surviving aliens and recover any technology. Return to base, study aliens and technology, build better weapons and fighters and repeat.

As mentioned that is a very basic overview, the depth of the game lies in the squad combat were all the action really takes place. Once your transport lands you control each member in a turn based phase. (For those to young to remember, you have set amount of action points, walking, firing a weapon, getting kit, etc, all costs a certain number of them.)

The graphics although very basic now were very good for the time, and some thought has defiantly gone into the surrounding terrain, a nice touch is the sunken wrecks in the play area when searching for the UFO. Especially as the damn aliens hide in the things and shoot your men. Although some people say: 'Turn based how basic' , the nice difference between RTS, is you get a real sense of strategy. You can get an enemy's attention and then sneak a squad around for a flank attack, whereas with RTS you just charge forward! If you liked UFO Enemy Unknown or the follow on to Terror From The Deep, X-com Apocalypse then this is a game for you. Persevere with the low res graphics, as programmers sometimes seem to forget nowadays, it not just the flashy packaging, but the meat inside the game and this defiantly a prime filling. 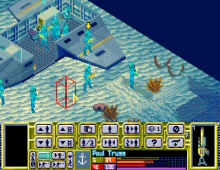