First in a series of games based on the famous Games Workshop miniature battle series, Warhammer Epic 40,000: Final Liberation (WHFL) is a great adaptation of the bleak Warhammer 40,000 universe. Worthy of note is the fact that WHFL marks the first time a game company adapted this intriguing and heavily tested system as is for the PC (EA's two excellent Space Hulk games are action/strategy hybrids of the concept, while Mindscape's also excellent Shadow of the Horned Rat and Dark Omen are RTS titles based on the Warhammer mythos). Leave it to Ken Lightner of Holistic Design, one of my most favorite game companies, to recreate a good tabletop system on PC without any intrusive "innovations". The result, as one would expect from the creators of such (underrated) classics as Machiavelli The Prince and Emperor of the Fading Suns, does not disappoint.

The game is based on Epic 40,000, Games Workshop's strategic battle system in the Warhammer 40,000 universe. You command one side of the conflict, the Imperium, in their or battle to liberate a planet from The Orks.

WHFL offers both custom battles and a full campaign. Custom battles are flexible and enable the creation of a large variety of encounters over a good selection of terrains. One to four players can engage in combat, with up to four humans taking control via LAN, TCP/IP, serial, and modem. Point allotments enable you to create up to four regiments composed of four companies, each in turn composed of four units. A wide array of units are available in the game, with many different warring "houses" and special leaders represented, each with copious background information. The elaborate mythology of the Warhammer 40,000 universe gives each distinct characteristics, and die-hard fans will be glad to find the familiar Chimera, Predator, Thudd Gun, Bonebreaka, Lungbursta and Spleenrippa units at their command. The combat is turn-based, similar to the X-COM games, although arguably with less nuances. The interface is simple and effective, although it will take a while to learn what each icon does. The unique characteristics of each unit, combined with the variety of units, provide an excellent and wholly entertaining combat experience that is hardly repetitive from map to map.

The AI, true to Holistic's reputation, is quite good. The only disappointment I had with the game is the fact that the unit graphics are quite poor - the colors are a bit too drab, and it is sometimes difficult to tell Imperium units apart from the Orks. Other than that, WHFL is a great game that is well worth the time for strategy gamers, especially fans of turn-based games. It is unfortunate that SSI's plan to release new army sets as add-on discs never materialized, so you can only play the Imperium side. The good news is that a few fans are working on an unofficial expansion pack that will add many more units and races to the game, so be sure to visit their site to voice your support!

Warhammer 40k fan's who want to play the actual table top game should download Warhammer 40k Final liberation because this game is utterly table top. However this game is extremely hard for beginners therefore is not recommended for newbie's but rather for veterans (if you can beat this game on hard your a pro) and determined green horns, otherwise stay away until you are ready.

Warhammer 40k Final Liberation is a really great game even if some things don't make sense and others just suck, however this game basically gives you control of almost every Imperial guard unit excluding some like guard from certain planets too far but include 3 types of guard. The first is Catachan Guards, jungle fighters mostly and then comes the Tallarn Guards who look like those WW2 German Sand Rats. Then comes my favorite Mordian Guards who look like those nut crackers and every time I think about the nut cracker I see this image of some poor bastard getting kicked or shot in the crouch. But of course what is an army without tanks?

The orks in the beginning can be pretty hard but when compared with later, you will hate them. 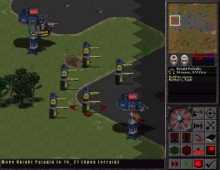