Warhammer: Shadow of the Horned Rat

This is the world of Warhammer: Shadow of the Horned Rat, a highly underrated real-time strategy game set in Games Workshop's popular Warhammer tabletop RPG world. The game places you in charge of a mercenary army in a fantasy world filled with Dwarves, Elves, Orcs, and rat-like Skaven. One of the first games that were developed specifically for Windows 95 (but still compatible with Windows 3.x), Warhammer offers solid mission-based gameplay with a fun evolving storyline. The premise goes as follows: the Empire is threatened by the forces of a demon, the Horned Rat. To thwart him, you must hire troops and lead them into over 40 battles, each of which unfolds before you in spectacular fashion.

The Super VGA 3-D graphics engine gives you a bird's-eye view of the action as you command your troops. During battle, you'll have to issue a variety of orders to your armies (charge, retreat, and use magic items are among the more useful). It can get confusing, but Warhammer is a little easier to control than other real-time games (such as Warcraft II) because your troops move in large, coordinated units. You can also zoom in and out of the battle, although the graphics is quite heavily pixellated at close range. One of the game's best features is the availability of many unique heroes and wizards you will gradually recruit as time passes. Each wizard has his own set of spells, and graphical effects of most spells are very well done and amusing to watch. Likewise, non-wizard heroes have unique abilities (e.g. magical weapons) that can turn the tide of battle if used at the right moment.

The game's only drawback in my opinion-- and a very serious one-- is the fact that it gets very difficult very fast. After the first four or five missions, you'll find yourself severely outnumbered in just about every battle. One word of advice: protect your troops. If you suffer heavy casualties early on, you may not be able to get reinforcements for subsequent battles, forcing you to restore to an earlier point. Another annoying downside is that the game's interface is quite clunky and difficult to use. The most important commands cannot be executed at one click of a mouse, and some buttons seem quite useless (for example, pounding on the fist icon, which supposedly raise morale of your troops and make them fight better, seems pretty ineffective and idiotic). Also, in the thick of a battle when many banners (carried by each regimen) are seemingly on top of one another, it's very difficult and frustrating to select the troop you want.

These gripes notwithstanding, SOTHR offers enough engaging gameplay in an intriguing fantasy plot to make you forgive its shortcomings. Even if you have to try some of the missions several times to win them, you won't mind replaying a battle in this excellent, addictive game.

Shadow of the Horned Rat is a real-time strategy game set within the Warhammer fantasy world. You are placed in charge of a mercenary company, with the simple aim of lining your pockets with as much gold as you can carry! To this end, you will find many dangerous missions available to you. They will lead you on a campaign that will take you across the Old World, with the fate of all good peoples in your hands.

The game is faithful to many aspects of the Warhammer universe, but is played out in real time, unlike its tabletop counterpart. This provides a very different challenge, as you will have to consider your actions quickly and carefully - or with copious use of the pause button! You are put right into the action from the first mission onward, and the early missions are quite challenging for a beginner.

There is a large amount of voice acting, which is generally quite competent, although nothing special by today's standards. The music is of relatively low quality but is very fitting for the game, with battle cries and other sound effects adding to the thrill of the action.

Reading the manual is highly recommended, as it not only provides you with help for the in-game controls but also background on both the world you find yourself in and the mercenaries that you command. The story presented in the manual does help to set the scene before you enter the fray.

One of the first things you will notice is the graphics. The introduction and campaign screens are very well drawn 2D artwork, with occasional 3D-rendered backgrounds. However, this is a stark contrast to the 2D/3D mix that you are presented with in the tactical game proper. This is a game that had the unfortunate timing to be developed before full 3D was as prominent as it is today, and this does make its age quite apparent.

By default, nearly two thirds of the battle screen is occupied by the command interface, unit information, and the map. This leaves a small visible area in the top left of the screen in which the battlefield is shown. At the beginning of the game, when you are dealing with no more than three or four units in an area, this doesn't present a problem. Later in the campaign, the ability to see more would be very helpful. The battlefield display can be extended to cover the top half of the screen with a "widescreen" button in the top-right corner, but this also removes the map. The map is of great importance when planning an attack, so this widescreen option is unfortunately of little use.

You begin your campaign with two regiments: one of cavalry, led by the player's avatar (your avatar is Morgan Bernhardt by default, though the name is customizable), and one of foot soldiers. Initial tactics revolve mainly around the mobility of your cavalry, until you can purchase other units. Once you have finished a battle, you will receive a debriefing which will let you know how many units per regiment were either killed or injured, as well as how much experience you have earned. You earn gold based on your success in each battle over the course of a mission - a bigger reward is given for those missions which require larger or more frequent battles.

Your gold allows you to recruit extra men for your regiments or to hire entirely new regiments to complement those already in your employment. Your two starting regiments are restricted to melee attacks, so picking up some ranged units can be of great advantage. Amongst the units available to you in the later game is a form of artillery, which brings added benefits if you can use them appropriately!

The mission structure is relatively linear, with branches available to gain extra experience, units, and magical items. These are all important in the later game, when having these stronger, more experienced units, can turn the tide in an otherwise evenly matched battle.

The game is difficult and can be quite unforgiving, with only the first couple of battles being what I would term easy, though for a beginner they can still be hard. It can take some time to adapt to the tactics appropriate for certain scenarios, with some missions (even quite early on) requiring special tactics to dispatch key enemy units.

To conclude, Warhammer: Shadow of the Horned Rat is a solid RTS experience which provides great entertainment, but whose appearance looks ever out of place in the modern era of gaming thanks to the mix of 2D and 3D graphics. With a graphical facelift and some tweaks to the user interface, I could imagine a remake doing very well today, as it is really only lacking in these two departments. Perhaps a choice of difficulty levels would also be beneficial to the less experienced player.

I would recommend this game to the more hardcore RTS players, and also potentially to those interested in Warhammer. For those less experienced in such games, I would say that this may be a bit of a jump off the deep end, unless you have the perseverance to learn the game's quirks. 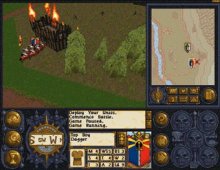