Warhammer: Dark Omen is a superb sequel to Warhammer: Shadow of the Horned Rat, Mindscape's first real-time tactical strategy game based on the Games Workshop's popular tabletop RPG franchise. The game boasts superior graphics to SOTHR, and a streamlined and much more intuitive user interface that makes battles much easier to manage. Marc Reissig says it all about what makes Dark Omen a great game in his review for the Games Domain:

"Dark Omen is primarily a real-time tactical game in which you direct an army of up to ten regiments that each comprise anywhere from one to twenty individual units or so. You control your army at the regimental level, so at the most you have to worry about giving orders to ten entities at any point in time. Like Myth: The Fallen Lords, it's a refreshing change of pace from most of the current crop of RTS games. There's no base-base building or unit manufacturing here - you are left entirely free to contemplate the subtleties of the slaughter. If you like Myth: Fallen Lords (and just for the record, I do), Dark Omen is about the closest you can get right now if you're looking for more.

The tactical module is pretty outstanding. Cavalry regiments will turn in formation and then charge into the vulnerable flanks of an unsuspecting enemy. Archers launch volleys of deadly arrows through the air, and the battlefield is filled with the sounds, explosions, and smoking shells of lethal cannon and mortar fire. Wizards are also available to conjure a variety of dangerous magics that can mow the enemy down or set them on fire and send them screaming into the hills. Height matters, line of sight is of extreme importance, and the dangers of friendly fire mean that you can definitely be your own worst enemy. Sometimes you will have a defensible position and sometimes you will be surrounded on all sides, but you will almost always be outnumbered. Get used to it.

Between engagements, the story is moved along by the occasional cutscene and by conversations between on-screen "talking heads" that are pretty similar to the dialogues used in Starcraft's excellent campaigns. These same types of characters can also appear on-screen during battles to give you helpful updates. At its best, Dark Omen manages to create a sense of drama both on and off the battlefield.

So what's not to like? Like Shadow of the Horned Rat, Dark Omen is a tough game. This challenge in and of itself is not a bad thing - at least you spend most of the time worrying about fighting the battles rather than fighting the interface for control of your units... The game is also pretty linear. The small strategic elements that the game offers off the battlefield are definitely nice touches - it's fun to decide what armor to purchase and who gets to carry the newest magic sword, and it's interesting that you sometimes are allowed to make a decision like whether to stay and face the more immediate peril or to move on to the greater objective given to you by your employer. Even so, though, you will sometimes find yourself fighting the same battles three or four times in a row. The first time your wizard might be slain by a lucky shot from enemy artillery (restart), and the second time you might accidentally place your cannon (shallow arc) behind your cavalry instead of the mortar (high arc) and obliterate about 1600 gold pieces in the first barrage.

Despite a few shortcomings, I find that Dark Omen has managed to re-capture the elusive "fun factor" that I felt was missing in Shadow of the Horned Rat. The combination of a re-vamped and streamlined interface with a powerful and smooth graphics engine makes Dark Omen a joy to play. If you enjoy the fantasy setting, don't mind real-time combat and are looking for a meaty single-player tactical challenge, Dark Omen is the game for you." If you enjoy real-time strategy games, especially very challenging ones, Dark Omen is a must-have.

Dark Omen is a tactical real-time wargame set in Games Workshop's popular Warhammer fantasy world. You assume command of Bernhardt's Grudgebringers, a powerful and prestigious mercenary army forced to defend itself against armies of the vengeful Undead. All the while, the Greenskins - orcs, goblins, and worse - will be a thorn in your side. Dark Omen is exciting, visually superb, and features an elegant interface. The end result is a game that will more than satisfy virtually any real-time strategy fan - even as it alienates those turn-based strategy gamers who made Warhammer what it is today.

The 3D landscapes in Dark Omen look gorgeous (it's almost a shame to litter them with the corpses of your enemies). Lush rolling hills, sheer cliffs and castle parapets, trees, waterfalls - everything looks colorful and beautiful, and even more so if you have a good 3D accelerator at your disposal. And just as the scenery appears real, so does it have realistic properties. Your infantry will have a difficult time scaling steep slopes while your archers will fare better on high ground since they'll have a better view of the situation. Rough terrain will slow your forces down, and obstacles like trees and boulders make for life-saving cover from ranged attacks. The 2D soldiers are well animated and easily distinguishable from one another. Better still, their corpses remain on the battlefield indefinitely, and things will look pretty grizzly toward the end of any particular fight.

Among the great aesthetic touches in Dark Omen are the 3D animated facial portraits representing the different regiments. It's more than a little unsettling when a skeletal wight commander shrieks "Charge!" as his undead forces rush forth to strike. Wounded regiments' commanders will appear bloodied and scarred, and when a regiment is completely destroyed you'll see a close-up of the commander as he screams and dies. All the portraits are unique, realistic, and expressive and add a great deal of character and personality to Dark Omen. Unfortunately, though its graphics are so distinctive, Dark Omen's sound is less than fantastic. All your different characters speak in exactly the same dull voice during combat, which goes a long way to stifle the various characters' personalities. And while the music in the game is appropriately grave and dramatic, it grows rather repetitive.

Commanding your forces in battle is an intuitive and efficient affair, made all the simpler through a helpful speech-driven tutorial. Deploying your troops to the field is a painless procedure, and you can issue initial movement or firing orders to your various regiments before the battle begins. Each regiment, belonging to both friend and foe, is represented by a color-coded battle standard. Even if a regiment is offscreen, its standard will still appear on the border of your display representing its location relative to yours. This effectively allows you to control all your forces from any point on the battlefield, such that you can easily redirect your artillery and ranged units to fire upon enemy reinforcements. Magic spells and special abilities are easily accessible, and issuing move and attack orders is as simple as clicking on the destination. Your regiments are efficient about moving from place to place, though they have a tendency to get a little confused about where to go when in very close proximity to one another. True line of sight means you'll have to keep a sharp eye out to make sure your foes aren't sneaking up on you, as unless the enemy is in direct view of one of your regiments, you won't see it either. Of course, you can often use this same feature to your advantage and hide your own regiments behind cover then charge the enemies' flanks when they draw close, often causing your foes to panic and rout. Morale plays an important role in Dark Omen, especially when your troops are pitted against the fear-inspiring Undead.

Though at first glance all seems well and good regarding Dark Omen's play mechanics, certain nagging problems creep up over time. These are mainly concerned with the limited functionality of the game's otherwise effective interface and friendly regiment intelligence, or lack thereof. Your friendly regiments do nothing without your express order besides fight for their lives if attacked and turn tail and flee if overwhelmed. You need to be there to turn your troops to face the enemy, order them to charge into battle, and otherwise baby-sit them under every circumstance. Your ranged units, including archers and artillery, will not fire on the enemy unless you tell them to do so. And they will not stop firing unless you order them to stop. This means once your infantry engages an enemy, your cannons and archers will keep on shooting and thus prove at least as fatal to your own forces as to the opponent. This would not be such a problem, but you cannot issue orders to more than one regiment at a time, which makes multiple cease-fire orders very problematic in the heat of battle. Furthermore, Dark Omen plays at just one speed setting; you cannot slow the game down (or speed it up), nor can you pause the action and issue orders without time constraint. While the inability to toggle game speed is certainly a realistic touch, it seems more like a frustrating oversight when weighed against your regiments' inability to use common sense in a dangerous situation. Dark Omen does follow the Warhammer board game's carefully balanced and fine-tuned rules of engagement carefully, but when you're forced to order up to 15 regiments individually and in real time, you'll find that strategy takes a back seat as you whirl about with your mouse in sheer desperation.

All this is to say, Dark Omen's lengthy single-player campaign isn't easy. You will face overwhelming odds with a limited number of troops, none of which is ever expendable. Since your regiments gain experience from battle to battle, allowing them to die is not an option. A successful mission affords you barely enough gold to replenish your losses, and even if you succeed in a mission, you may need to try it over - if only to win while sustaining fewer losses. Of further note, though the missions are fairly long, you cannot save your progress during battle. Yet in spite of its daunting challenge, the campaign is thoroughly enjoyable. The story progresses between missions in aptly delivered speech (with plenty of German accents) using the same animated portraits you'll see in battle. The campaign branches at several points, forcing you to make difficult decisions regarding where to fight next, all the while knowing you will face the repercussions of your actions at a later time. You will constantly encounter new allies and face powerful new enemies, and the missions are all exciting and unique. The campaign is worth going through more than once if only to experience the alternate plot branches.

While Dark Omen only supports a maximum of two simultaneous players for network games, taking on a human opponent is a pleasure. You can build your army using a defined quantity of resources on your own time, choosing from a vast roster of troops from either the Allied, Greenskin, or Undead armies, then pit it against your opponent to show him who's in charge. Dark Omen battles are quick and brutal as both sides are inevitably forced to clash under the threat of potentially devastating artillery fire. Dark Omen is by far the most aesthetically pleasing computer rendition of the Warhammer world. Turn-based strategy fans, or traditional tabletop Warhammer enthusiasts, will find Dark Omen's punishing real-time combat far too frantic. But its sleek interface, great single-player campaign, and action-packed multiplayer mode will add up to many hours of enjoyment for Warhammer and real-time strategy fans alike. 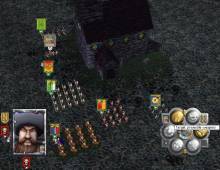