This more ambitious follow-up to SimCity lets you play God-- take charge of an entire planet from its birth to its death--10 billion years later. Guide life from its inception as single-celled microbes to a civilization that can reach for the stars. Inspired by James Lovelock's Gaia hypothesis, SimEarth simulates the Earth as one interrelated living organism. It's a solid simulation that unfortunately suffers a bit from the too-dry gameplay and steep learning curve.

A wonderful game! The follow-up to Sim City - Sim Earth. This time you don't control a city, but a whole planet. The center of the game is the process of evolution. You aren't only able to place several lifeforms, you can also control a high number of variables like the continental drift or the split rate of lifeforms. While not having a real goal it's a great feeling to see "your" creatures growing and evolving. It's a long way from the single-cell-state to a prospering civilization that finally makes its way into space. Every game is different - and of course not only the monkeys can evolve to an intelligent species - you can also have intelligence in the oceans or a lizard-folk or many other things.

In my opinion this is not only the best game in the Sim-Series - it's also one of the best simulations ever made. The game was created after real scientific models, it's far more than "just a game" - it is simulation of the process of evolution - both of lifeforms as well as of a planet.

To shortly resume SimEarth: The Living Planet (also known as SimEarth: Der lebende Planet, Sim Earth), it's about educational, simulation and ecology / nature. It was done by Maxis Software, Inc. in 1990. Feel free to download and try it! 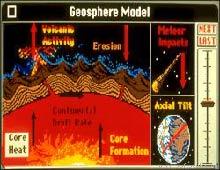