A cool little game by Japanese designer Yoot Saito was a big hit on the Macintosh but received only lukewarm response from the PC crowd. Although one can find many faults with the game's underlying mechanics, gameplay is fast, fun, and humorous. Zone a tower and increase its population to raise your score and gain access for more room types. The narrow focus limits the variety of additions you can build for your tower, but there is always enough havoc you must keep under control (e.g. elevator congestion and cockroaches in suites) that it hardly seems to matter. Also check out Yoot Saito's Yoot Tower, the excellent sequel to this gem.

After their SimCity conquered the world concerning simulation games, Maxis Software continues their sim-games. In SimTower you have to build a skyscraper that reaches the clouds and of course is a nice place to live in. You can build appartments, offices, restaurants, etc. Of course you have to take hold of everything else.

I can clearly remember the day I got this game because I was given it as a gift along with SimCity2000. Of course, I took one look at SimTower and sat down to play SimCity. After about two weeks playing SimCity with no success I finally sat down to play SimTower expecting to find the Sim... idea stretched to its extremes, so I was surprised to find SimTower so entertaining and enjoyable.

Anyway, enough memories. The aim of SimTower is to build a hundred story tower block filled with offices, condos, shops, restaurants,a hotel, a cinema and a party hall. Your tower will also need a medical centre, good security, adequate parking and good recycling facilities. The eventual aim is to place a cathedral on the top and win the game.

At the start of SimTower you only have the option to build offices, cafes and condos. I would advise offices as the best place to start as they bring in a weekly rent and the occupants will not be as fussy as those who move into your condos. If you do choose to build condos keep them well away from your offices as the residents will not like the noise of the workers coming and going. Once you have been upgraded to a two-star tower, a hotel is the way to advance. Where offices pay rent by the week, hotel rooms pay by the night so you will see money come in much quicker.

Remember that everyone in your tower is an individual with feelings. If you have 1200 people trying to get into 1 elevator people are going to get stressed. Fortunately, if you have the money, you can put up to 8 elevator cars in one shaft (sounds dangerous to me!) which will reduce those stress levels.

At weekends the office workers will not be in the tower but the shops, restaurants etc. will still be open so think about placing them close to the ground floor, maybe underground. That way people arriving at your tower on a Saturday will not have to take a 80 story elevator ride to get a cup of tea.

There are also a number of random events that can occur, some good, others not so good. Terrorists may bomb your tower so make sure your security is adequate to find any bomb. A security centre is best covering only 6 floors but will be adequate for about 15. After that you will need to build more. On the brighter side you will sometimes find buried treasure when building underground. If not, just look forward to your yearly visit from Santa.

The interface is a fairly standard set of windows. Nothing to get excited about but it does the job well. The graphics are intended to be more functional than good looking but they actually succeed as both. The sound is ok but so basic that you will probably turn it off before long.

While the gameplay is good and of a very high quality there are a few things that weaken the game a little. A three-star rating is fairly simple to get, though it will take a while, but a four-star rating will take so long that you will probably get bored and give up before you get there. When you get to the third lobby at floor 60, you will suddenly find that it is nearly impossible to get an elevator to it because they will all reach their maximum length on floor 59. The game has two speeds. When you open the game it will be in fast mode which is ridiculously fast. Disable this under the options menu and you will find the game is now ridiculously slow. My only solution was to build in normal mode and then switch on fast mode until I wanted to build again.

There is still a lot to this game that I haven't covered, mostly little details that make it even more enjoyable. This game is not one that you will want to play everyday but it is great fun and if you hold on to it is a good game to come back to when you are bored of everything else. 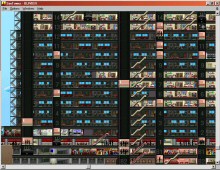 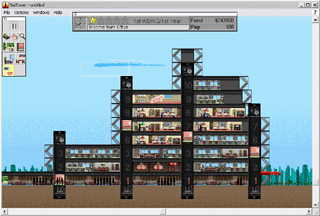