SimAnt was released by Maxis and is part of the Sim series. In the nineties, several Sim like games were created, Sim Ant is a ant colony simulator.

You have to manage your ants by digging tunnels, find food, protect the queen, expand your territory, fight against many enemies, including the evil red ants ! The conquest of the whole garden and the house will make you victorious. 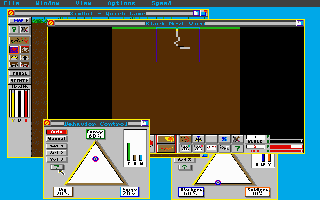