Maxis once again lets you play God-- but in contrast to SimEarth's macro-management, Simlife lets you design and manipulate the genes of plants and animals to see how they behave in a simulated environment. You can manipulate many aspects of the world, such as water/land ratio, yearly temperature cycles, moisture, soil depth, and more. Simlife is a great game for anyone with a passing interest in genetics and ecology. The downside was that the game was a memory hog for its time-- requiring a whopping 4MB to run If you like to tinker with genetics, SimLife is one of the best electronic "toys" of its kind. Highly recommended!

Note: this download is the rarer Windows version that works well on Windows 95 and above :)

It's a virtual world, and you can modify pretty much anything and everything. It's called " The Genetic Playground. " You can make all sorts of different types of creatures in this game simulation and you can modify them in to doing anything, and modify their land in to any shape or form you want to. You can have normal species or your own species. Like say if I wanted to make a lionad a tiger, and name it Liger, I could. How about a penguin body, cheetah legs, alligator or a crocodile mouth, and monkey arms. I could probably do that. Oh, with a wolfs tail and horse nostrils. You can pick all sort of different colors of the animal species type of thing you want to create and you can also pick the different type of wide and different type of length.

In the early nineties, Maxis Software Incorporated both published and developed SimLife for the Windows format on the personal computer. While it was also ported to the Amiga, its main following was on the home computer, whether it was a PC or Apple version. It is a managerial style simulation game that plays from the very user friendly top down perspective.

In SimLife, the gamer essentially plays the part of God, working to create and ecosystem out of the blank slate that the world once was. It is a very detailed game. The user does not just decide to create a jungle (for example), throw some foliage in some wet earth, launch some critters in there, and just watch them exist. The player actually can manipulate the genes of these creatures and create custom plants and animals from scratch, then place them in the environments of the world to see if they can survive or die; watch how they coexist with his other morbid creations; can watch them mate and can witness them evolve, sometimes even mutate. It is sort of like the Book of Genesis meets the Isle of Doctor Moreau.

Aside from having the ability to create some really wild creatures (one of the listed examples is a kangaroo that lays eggs and eats insects) the user also controls most everything about the environment itself. He can adjust the sea level and make more land or more water. The temperature, and also the annual (and type of) precipitation can be adjusted by the godly gamer.

Of course, while the user is in charge of this genetic playground, and it is fun to try to make the weirdest stuff possible, the goal is to attain a self-sustaining ecosystem, with checks and balances in the natural world that will allow a comfortable population to live together. This means balances in predators and prey, creating both plants and animals that are well-suited (or can at least adapt to) their respective environments, and so forth. It is really easy to make a super predator who smokes all of the herbivores in the area and eventually hunts its way to extinction. Fun to watch, yes, but it still equates to ultimate failure as the godly geneticist.

SimLife for Windows is a strategy game that is going to require a lot of thought and planning to succeed at. It is a fun play and is certainly interesting, even when it becomes frustratingly challenging. Failing is sometimes as much fun as succeeding. Give it a try and see how you would have done in the first seven days of the world's existence. 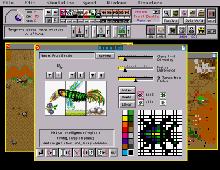