Yoot Tower is a much-improved sequel to Maxis' tower-building classic SimTower. Similar to the first game, Yoot Tower was much more popular on the Mac than it was on the PC, probably due to the fact that both games were coded on a Mac and released for that platform first. Your goal is still the same as SimTower: build a high-rise that offers your residents a "stress-free" environment. A happy Sim resident gets enough business to make a profit, has an easy route to get to work and not too many people clogging the hallways and elevators. Lots of parking and great shops and restaurants couldn't hurt either.

Yoot Tower (so named after its creator, Yoot Saito) sports numerous improvements over SimTower, making the game much more of a game than a toy that SimTower was. Just about the only thing that remains the same is the fact that you don't control who moves in. But Yoot Tower lets you name and add them to a "favorites" list to locate them in an instant, to see what they're up to, how much money they've got, and how happy they are with their environment. The AI of residents is noticeably much better than SimTower: the effects of your actions are reflected much more realistically in the game. Similar to Bullfrog games (e.g. Theme Park), the residents now really seem to have minds of their own. You can stick a microphone in the face of people down in the lobby, for example, to find out what they think about the place. You can also alter menus in the many and various restaurant types, and even choose what kinds of movies are shown.

Not only is Yoot Tower addictive, it's also very difficult due to more complex AI, additional challenges, and hundreds of different kinds of rooms you can build and innumerable options for each. There are hundreds of variables you need to take into consideration. Should a Mexican Restaurant go here here, or maybe instead a Fashion Boutique? Perhaps a Book Store or a Barber Shop? At what floors should my large elevators stop? How many housekeeping units can I get away with? Where's the best place for a cigarette vending machine? If I have ten offices per floor, how many elevators do I need? How much should I be charging for rent on a deluxe apartment in the sky? Next thing you know, you've suddenly got a 120-floor madhouse, hundreds of picky residents?and only a few hours before dawn when the real-life you have to get ready for work.

There are numerous other improvements to the basic gameplay. You now have various seasons ? which affect number and types of residents throughout the year. To add more flavor than tower building in a nondescript location, Yoot Tower includes 3 different real-world locations (Hawaii, Tokyo & Kegon Falls), each with different conditions for success, different costs and sources of revenue, and unique attractions. Kegon Falls, for example, attracts floods of tourists during the summer but is eerily quiet during the winter (that is when you will start worrying about whether your fixed costs are too high). As in SimTower, your tower will be rated every time you get a visit (always unannounced) from VIP's who will evaluate your facilities. If you make them happy, your tower gets bumped up a Star rating. The more stars you have, the more items you can build.

Overall, Yoot Tower is an excellent game of business management that is not for the easily frustrated. It can get monotonous at times, and is a game that only devoted micro-managers will be successful at. However, if you're looking for a challenging business sim, you will likely become a Yoot addict like me.

Yoot Tower (Sega, 1999) is an improvement over the Maxis/Electronic Arts game SimTower. The same fellow, Yutaka "Yoot" Saito, who created that decided he could do a better one without as many restrictions as Maxis placed on him so he rewrote the game and convinced Sega to market it. Many consider Yoot Tower to be SimTower 2 because they are similar in game play and written by the same person. This game was available in both Mac or PC formats and works great in XP with 95/98 compatibility mode so no need for any other utility to emulate that ancient OS.

You try to build the best tower you can with hotel rooms, offices, condos, shops, entertainment facilities and the extras to keep them clean or accessible like elevators, stairs, escalators, parking lots/ramps, trash recyclers, along with housekeeping and security rooms. Random VIP's will stop by your tower from time to time depending on your star rating. These things will vary depending on which location you build in and are based on the number of stars your building receives.

Playability is simple point & click with icons. There are three starting areas: Kegon Falls, Hawaii or Tokyo with each location having different costs, size limits and citizen or visitor tastes. You can adjust the rent of each of your shops, offices or condos to suit your needs with full zoom and colour coded warnings for your hotel rooms that show status. Unlike SimTower though, you don't have to keep the time running to build. You can pause, build a few things then unpause to let people access them; this can save you cash on interest rates for loans you take out. 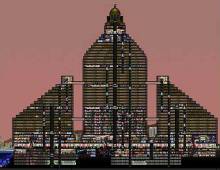