Uprising is a very fun and highly underrated real-time strategy game that offers many innovations that are sadly overlooked. Chris McMullen of Games Domain explains in detail why RTS fans should take a look:

"Uprising from The 3DO Company and Cyclone Studios bears certain similarities to Carrier Command - only it's much better. You play a member of the Rebel Federation, an organisation formed to fight against the oppressive regime of the Imperium and unsurprisingly, you're the Rebellion's only chance of victory. Piloting a super-tank known as the Wraith, you have to take over a number of planets in order to ensure victory and subsidised booze for the Rebellion. But it's not just a case of zooming around each planet in your tank, blasting things - if you take that approach, you won't last long, because Uprising isn't a straight shoot-em-up, it's more like Command and Conquer in 3D. You'll need to build bases to provide you with enough vehicles and troops to kick the Imperium off-planet. There are three different modes you can play the game in - Quickstart, Multiplayer and Campaign mode. Quickstart mode lets you play a single battle against the computer - Multiplayer mode, as the name suggests, lets you take on other players.

Base building in Uprising is a little different to base building in other real-time strategy games - you can't just build a base anywhere that takes your fancy. Instead, you can only build a base on special pre-placed base platforms called Citadels. There are a limited number of Citadel platforms on each level - some may be free for you to build on, others may have been claimed by enemy forces in which case you'll have to blow up their bases before you can occupy them. Then, a drop ship will fly in and drop in your first base building, the Citadel Tower. It's vulnerable for a minute or two until it charges up, after which it will automatically fire at any enemies who come in range. And if you feel like it, you can take control of the tower turret directly, and shoot at the bad guys yourself. You can also place up to three turrets around your base, either laser turrets or Surface to Air Missile emplacements, again to defend against enemy attack. If it sounds complicated, don't worry.. it's very easy to pick up.

Each Citadel base will also have a number of free base spaces, the actual number varying from platform to platform, which you can fill with other useful buildings including troop factories, tank factories, bomber factories, power plants and more. The power plants are used to extract geothermal power from beneath the citadel - each citadel has a limited well of stored power which can be tapped, and which is used up whenever you build a unit. Perhaps 'build' isn't the right word, since Uprising uses a different troop control system to other strategy games. You can't direct your troops around the battlefield - instead, you go to a certain point in your Wraith and teleport them where you want them to be. They'll then go after the nearest target and if they manage to destroy it they'll stay there, guarding the spot. If you've finished with them, you can teleport them back to your base and reclaim the power you spent building them. But you can't just teleport troops and vehicles all over the map - you can only teleport them to a place within your field of view - which can be blocked by hills and other obstacles, as in Total Annihilation. That means that units can only be teleported within range of your Wraith or the Citadel turrets of your bases. Hence you're forced to always be in the front line, and you risk your tank being destroyed. You do have the ability to repair your tank back at your base, you can defend yourself with your tank's weapons and you do have several lives. But nonetheless, this system does make things tense at times, something that not too many games manage to capture.

The more Citadel bases you've managed to claim, the faster you can produce units. Completing a mission will net you credits, which can be then spent between missions on upgrading your units, buildings, Wraith or weaponry. Each unit has five or so tech levels, each of which cost cash to upgrade to, but it's worth the investment to produce faster, harder and stronger units. It's up to you exactly how you spend your money. And the enemy is no slouch - as you progress through the game, you'll find the Imperium is upgrading its units and weapons too. I don't know exactly how complex or clever the Imperium AI is, but it seems pretty competent - when I started using my laser satellites to take out enemy bases, the Imperium forces started attacking my bases and going for the Satellite control facility - and in many cases succeeding. So much for Star Wars technology..

From the word go, you'll be glued to the screen by Uprising's deeply involving gameplay. Imagine the best bits from every real-time strategy game, coupled with a funky 3D engine, and you're halfway there. Whether you're playing on your own or with similarly warlike friends, you'll be blown away by Uprising - there are enough levels to keep you going for quite a while and even after you've finished them, you'll keep coming back for more. A stunner of a game - you can't afford to miss it." 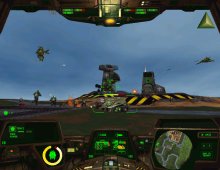