Warzone 2100 is a fun and highly underrated real-time strategy game from small UK-based outfit Pumpkin Studios. The very thorough review at Intelligamer.com says it all:

"Hang on a second, I know what you're thinking. Warzone 2100? Just another Command & Conquer clone right. Gather resources... amass a huge army... kill the enemy... pillage his homeland. Well it is, sort of, but it is also a bit more. Pumpkin Studios and Eidos Interactive have delivered some unique features compared to other real time strategy games. For starters, the game is in true 3D. But there's more... how about actually trying to keep your units alive for once, letting them gain experience to make them better fighters? Or the ability to design 2000 different units over the course of the game? How's that for different?

The story behind Warzone 2100 is a post-apocalytic one. Fifty years from now NATO has collapsed and the Eastern hemisphere is raging with civil unrest. Countries fight one another, terrorists nuke cities in Europe, all is not good in the world. Thirty years later, the United States reverts to its historical isolationism and builds the NASDA system, similar to the SDI defense system of the 1980's. To make a long story short, something goes horribly wrong with the system. It unleashes nuclear weapons on major cities around the world. As you can imagine, those countries it are less than pleased and strike back. After the radioactive dust settles the human race is decimated, a scant million people survive to encounter nuclear winter. One group of survivors happen upon an old military base and plan to rebuild civilization by force, if required, and find out the reason why NASDA went haywire.

The battlefield is initially shrouded in fog of war, you won't know where enemies are until you come face to face with them. And that's a treat. The wasteland of post-apocalytic Earth is rendered in true 3D and looks quite good. You can rotate, pan and zoom your point of view to get a view of the battle that suits you and the situation. Doing so is ease itself, just right-click and nudge the mouse and there you have it. Despite this ability, I did find myself with the camera angle looking straight down quite often because it made it easier to see possible traps behind hills that were easy to miss at a different angle.

Another thing that separates Warzone 2100 from more traditional real time fare is that for each campaign you only need to build one base. All of the battles use three main maps where your facilities are located, each with a variety of sub maps for different missions. This puts a premium on both advanced planning and proper base construction, you'll have to live with it for a long time! For missions that take place away from the base, you have the ability to continue production at home and stage newly built troops to the battlefield in a large transport. I liked this idea, it made everything seem more integrated into one large campaign. It also meant that a lot of the tedium of building the same structures over and over was removed. Cool!

One of the big features in the game is the ability to design up to 2,000 different units. That's a pretty gaudy number to be sure, but many units are only subtly different from one another. While some of these variations are useful some just seem to take up space, although it does allow for a lot of different tactics in practice. Even so, a heavy tank unit with a heavy cannon will cost more and is more useful than a light wheeled unit with a light cannon. Weapon technologies are not always effective against everything, which means you do have to be concerned about having a proper mix of forces. Having the bulk of your army sport heavy cannons is fine, but woe unto you if you forget the importance of anti-infantry, anti-aircraft, and mortar units in the attack.

In the vast void of quality real time offering since Starcraft was released, Warzone 2100 is a greatly welcome surprise. It's a darned good game and any fan of the real time strategy genre is going to enjoy it's many embellishments on the tried and true." 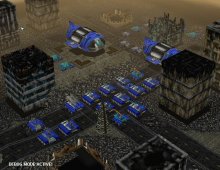