Urban Assault is a superb and highly underrated blend of real-time strategy and first-person shooter genres - much like Uprising but with significant differences, particularly in strategic options. The Adrenaline Vault's detailed review says it all:

"The game's recipe looks a little like this: one part ID4, a teaspoon of Starship Troopers, throw in a pinch of the Borg, mix it all up with a heavy dose of the X-Files, and then bake for a millenium at 10,000 degrees. The game begins a few years after the "Big Mistake," or more accurately, worldwide nuclear holocaust. Two alien races, wanting to consume, harvest, and use the Earth for their own purposes, have taken the opportunity when humanity is at its weakest to attack. Unable to unify, the human contingency is broken up into warring factions, hell bent on destroying one another for the blunders made leading up to the "Big Mistake." Because the oceans and atmosphere have all but been destroyed, habitation has evolved under force field domes. With so little of humanity left, the need to survive has made cyborg implants a necessary evil, and those still alive have been made one with machine.

Each race has more than fifteen units capable of waging war in the air and on the ground. The differences between these units and the races in general is astonishing. Although the human factions look similar in some aspects, for the most part the units are distinct in look, feel, and capabilities. You can choose to fight the war from multiple perspectives and with a wide range of strategies. As the Host Station commander you have the ability to take command of any vehicle that is part of the Resistance. Making the war personal is not only a lot of fun, but necessary as each unit in the squad you join is given an armor and weapons boost, and the unit you occupy is doubly fortified.

The scope of the war is both a strength of this game and a weakness. On the one hand no other game I have played does as good a job at making me feel part of a huge war, with what seems like thousands of units locked in the trenches ready for battle. Taking a tank into enemy territory and seeing a squad of 25 attack choppers coming over the ridge at you is quite cool. In contrast, Battlezone's world is smaller and each unit is more vital; loosing one tank can mean the difference between success and failure. This is not the case here. Although each unit is important, more effort and attention is payed to winning an entire war, not just the battle.

The problem with having such as large scale war is how one person manages it. In the beginning missions this isn't that much of a problem; units are fewer and battles are sparse. Later on, as the battles take on a more epic feel, managing, building, harvesting, and fighting the war become more of a chore than a challenge. Luckily Urban Assault has a few gameplay options that can alleviate some of the micromanagement burden, such as individual unit aggression settings. I also found control of the units to be somewhat cumbersome. As I play the game more this becomes less and less of a problem, but I fear many players will initially find navigating units, especially air units, troublesome.

The enemy AI is fairly good, and varies in style depending on what race you're fighting. Some races are aggressive to a fault, while others use tracking devices and scouts to determine their actions. The main problem with the AI are those units on the player's payroll. The units you command aren't the brightest pupils in the classroom, and oftentimes have trouble doing simple things, like pathfinding.

The difficulty in the game is on par with its siblings Uprising and Battlezone, which I consider both difficult games. This is not to say the game is too difficult; it is not, but no dynamic campaign means you'll be doing some replay. The game does ship with a readme file that explains how to play on an easier level of difficulty, but technically there is no difficulty setting. Urban Assault, while not quite as good as Battlezone, is a strong entry into one of the most exciting genres in gaming today. While not entirely original in premise or gameplay, [Urban Assault] is unique in scope, delivery, and style, and therefore worth playing to anyone interested in strategy and action games." 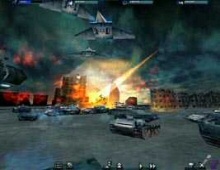