UFO is a nice unofficial clone of "UNO" card game marketed by Mattel that was popular in the early 1990s and still retains a sizable following as one of the best "family" card games. If you have never played UNO before, brief rules are as follows: the game is played between 2 to 10 players. Each player is dealt 7 cards with the remaining ones placed face down to form a "draw" pile. The top card of the draw pile is turned over to begin a "discard" pile. The first player has to match the card in the discard pile either by number, color or word. For example, if the card is a red 7, player must throw down a red card or any color 7. Or the player can throw down a Wild Card. If the player doesn't have anything to match, he must pick a card from the draw pile. If he can play what is drawn, great. Otherwise play moves to the next person. When you have one card left, you must yell "UNO" (meaning one). Failure to do this results in you having to pick two cards from the draw pile. That is, of course if you get caught by the other players. Once a player has no cards left, the hand is over. Points are scored and you start over again.

This PC version of UNO game by NecroBones is a lot of fun, and much better than the few Windows 95/98 versions I came across years later. 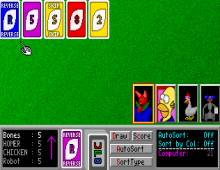