Too bad many people are discouraged to play this game because they think Chinese Chess is either not interesting or too difficult to learn. Nothing can be further from the truth! Chinese Chess is easy to learn, especially when Interplay applies the wonderfully original idea of Battle Chess to the intriguing Chinese Chess system, animating Chinese soldiers with style and humor. With the tremendous task of memorizing Chinese characters removed, now you have no excuse for not trying this one out. 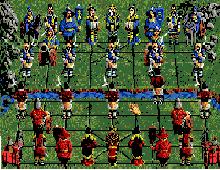 People who downloaded this game have also downloaded:
Battle Chess for Windows, Star Wars Chess, Lords of The Realm 2, Magic: The Gathering