Battle Chess for Windows is a little-known Windows 3.1 version (which works well in Windows XP and above) of Interplay's classic chess game. The game is identical to the original (1988) release of Battle Chess in every respect, except that you can now play the game in Windows, and there is a nice on-line help feature. Although neither additions adds much to the game, it is the version to play if you are using Windows XP or above :)

So, why is Battle Chess so revolutionary? The answer: it was the first "chess game for people who don't like chess." While you can play the game from the traditional 2D top-down view of the board, it is the 3D/isometric view that makes the game unique. In the 3D view, you move your pieces and then watch them walk to their new location, or engage in fights in colorful and very well-drawn animations. Knights slash opponents with their swords, stone rooks pound with their fists, and pawns pierce their enemy with spears. These little fights are what set Battle Chess apart from other chess games, but they are essential to making chess much more entertaining to the majority of gamers who don't play chess regularly.

One major downside of the game is that the AI in the game is quite horrible: there doesn't seem to be much difference in intelligence between a Level 1 computer player and a Level 9 one, except for the time it takes them to figure out a (usually mediocre) move. Good thing you can play against another human player via serial connection. And naturally, the animations will start to repeat after many play sessions, thereby losing their original novelty and appeal. All in all, Battle Chess IS a classic chess game for beginners, although it lacks helpful tutorials or other features of subsequent introductory-level games such as Maurice Ashley Teaches Chess - features that would have added much more staying power beyond cool animations. A top game, but one that you will find fun only once in a while after you have seen all the animations. 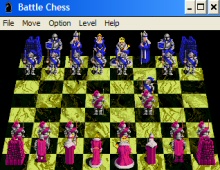