Star Wars Chess is a lackluster animated chess game similar to Interplay's Battle Chess. The SEGA CD version of the game, released a year later, is better known and better-sold than this rare PC version. Each traditional chess piece (king, rook, pawn, and so on) is represented by a character from the Star Wars movies. In addition, when one piece captures another, the game zooms in to the board, and you are treated to a small battle animation.

If you don't know how to play chess, don't expect Star Wars Chess to teach you. Not too worry, though-- the AI in the game is pretty bad, which more than makes up for the lack of tutorial mode. The chess pieces are represented as follows:

Kings - Luke Skywalker and Emperor PalpatineQueens - Princess Leia and Darth VaderBishops - C-3PO and Boba FettChewbacca sets Boba Fett on fire.Knights - Chewbacca and Tusken raider Rooks - Yoda and AT-STPawns - R2-D2 and stormtrooper If you get tired of playing with Star Wars characters, you can switch to a 2D mode with traditional pieces.

As the review at Videogames.com makes clear: "...[when] it comes down to it, chess is chess, no matter what the pieces look like or what fancy animation accompanies it. But chess fans and Star Wars fans alike will probably be turned off by the awkward perspective of the chess board and the long load times that bog down gameplay. The animations themselves are rather violent and sort of creepy [e.g. R2-D2 gives Darth Vader laser shocks, Chewbacca sets Boba Fett on fire, etc], but if you turn them off, all you are left with is a slow, bare-bones computer chess game. A good alternative is to turn off the game altogether." Recommended only to fill up the collection of die-hard Star Wars fans who must own every Star Wars-related game on the planet (I'm looking at you here Sytass ;)). 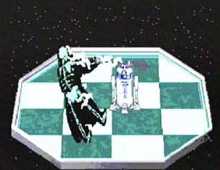