Where in The World is Carmen Sandiego? Deluxe Edition

This is a remake of one of the first games made by Brodenburd software dating all the way back to somewhere in 1985. The idea itself is very original and it puts you in position of an Interpol detective.

Your task is to hunt down criminals. During your investigation, you get to fly around the world, travel to different cities and investigate many places in them. You get different kinds of clues, based on which, you can issue an arrest warrant and track down the criminal you're after. The game progresses in such a way that you never get the same case twice! The potential is limitless.

As for the graphics, there are plenty of very nice pictures representing different towns and the introduction is just satisfactory. The only thing that could have been done better are the sounds which tend to repeat themselves frequently and are pretty annoying. Of course, we have to take into consideration the fact that making PC speaker sounds manually is both time consuming and difficult.

Finally, the navigation through the game is simple and straightforward so there shouldn't be any problems with that. All in all, this classic is a must. 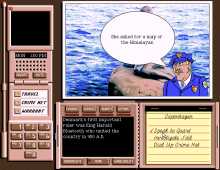 Where in The World is Carmen Sandiego? Deluxe Edition screenshot