Where in Time is Carmen Sandiego?

The mystery series continue. In this episode you'll have to fly through time with your chronotrigger to catch the thief. Pieces of the puzzle will fall together once you progress and get more and more clues. Good luck with hunting! 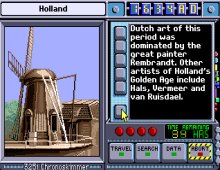 Where in Time is Carmen Sandiego? screenshot