Where in The USA is Carmen Sandiego? Deluxe Edition

When you first play the game, you are a rookie detective who receives a case from the Chief. Not much is known about your suspect. You must hurry and track down the criminal before your deadline is up.

Repeating your actions or traveling to the wrong place will waste time, so try not to make mistakes.

You start the case in the state where the crime took place. The villains seem to commit farfetched crimes. One has stolen Lincoln's Log Cabin, Seattle's Space Needle has been swiped, the OK Corral isn't OK anymore, and for a really outlandish one—Mt. Rushmore is missing.

You travel throughout the specific city you are in. You have to ask people if they have seen anyone suspicious. Some people will tell you a physical description of the suspect, what he/she is wearing, or hints on where the suspect is headed off to next. When you get these clues, you need to put them into a specific warrant file. Then

when you get enough information you need to have a warrant issued. If you don't have a valid warrant, the thief can't be arrested.

The game has you traveling in all 50 states. To make it a bit easier on you, the states are narrowed down to just a few when it's time to travel to another state. If you select the wrong state, the locals who you talk to won't have any information for you. If you chose the correct state, then you will see bumbling criminals running around.

Every few cases that you solve, you will be given a higher rank. As you go up higher, so does the level of difficulty. When you solve your final case—catching Carmen Sandiego - you will be entered into the Hall of Fame.

This game features a database of information about all of the states. There are tons of facts about each state's geography, landmarks, history, economy, and culture. There are also photos, video clips, maps, flags, and music.

You will enjoy all of the Carmen games if you love geography, history, and crime. I suggest downloading all of these games on this website so you can have loads of fun catching these villains and their leader. 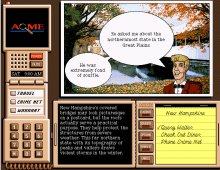 Where in The USA is Carmen Sandiego? Deluxe Edition screenshot