This is basically a trading game in the 16th century, and a good one! The game is quite extended and has many options in it. There are a lot of ports in the game and in most of those you can trade anything from gold to glass beads. You can equip your fleet with different kinds of hulls and cannons and attack other fleets. The game map is very big and you can explore the coasts of every continent (even Antarctica!). There are villages where you can find special wonders like ayers rock or the Niagara falls.

The only 2 bad things about the game are the music, and the storyline. Well, actually the storyline is ok, but it gets irritating if you just want to play the game without it. You can choose the role of one of six adventurers. The adventurers represent the six most important world powers at that time: Spain, Holland, Turkey and Italy. Each of them has a different storyline and different quests to be completed. So, if you're tired of playing with one character, you can start over with another one.

Skills you and your crew can have include Gunnery, Mapmaking, celestial navigation, accounting and negotiation. By adventuring your experience and fame increase. When you've got enough fame the king of your country gives you a special job and a new title when you complete it. The system looks a lot like the one used in Pirates but is a lot more extended. You should really get this game if you like trading- as well as war games. Just remember to turn the sound off.

Uncharted Waters is the most un-KOEI game ever made by KOEI, perhaps because it is the only series not designed by Kou Shibusawa, the prolific founder of KOEI. Based on the high-seas adventure period in 17th century Europe, you are an honest merchant trying to amass fortune while coping with pirates and fickle mayors. In Uncharted Waters 2 you can choose to play as one of the characters, each with different goals and purposes. This makes the game highly replayable and adds refreshing RPG and adventure elements to the strategic game. If you love Sid Meier's classic Pirates! but want something a little different, this is the game for you. 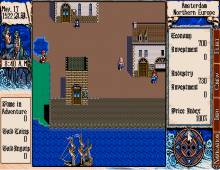