Romance of the three Kingdoms 3

It's one of those hardliner-strategy games, you really gotta WORK while playing this. No no no - it IS fun. Well, it seems so - I haven't played it THAT much, but I think it's worth a try if you are looking for a strategy game with real substance. Also seems quite realistic, very much options, pretty much details - yeah, good thang for a long night playing! There are some historical scenarios which you might play. If they really stick to reality - well, sorry, but really don't know much asian history... But that is exactly one aspect, I find interesting in this game. If you're fed up with the sixthousandth "Napoleon at Austerlitz" or the war of secession or stuff like that, I'd say: Go East! Try it out, if you don't fear numbers and stats - don't be afraid, there are some graphics (pretty well done, regarding the fact, that it seems to be just EGA).

After the disappointingly easy Romance of Three Kingdoms 2, KOEI revamped the whole engine and introduce many enhancements for the third game in its flagship series. The results are mostly positive, although some might argue that the game is still much easier than the first game.

There are many enhancements and new features. First, RtK 3 places a much stronger emphasis on tactical battles. The game debuts the attractive isometric view of the battlefield, which makes commanding your army more exciting. It also introduces new units such as crossbow, strong crossbow, and cavalry. Size of castles are more realistic in the isometric view, and you can actually place units at various points inside the castle if you are defending against an invasion. Capital Cities such as Luoyang and Xu Chang have bigger castles compared to other towns, spanning almost the entire screen. This makes it more difficult to capture these cities, as the castle can house many more units of the defender. There are also several new tactics, such as ambush and pitholes if an advisor is present in battle.

On the downside, the game is much easier than RtK 1 if you have intelligent advisors (with 95 or above intelligence score). This is because their advices are so accurate that you already have a good chance of winning if you just blindly do what they say. Still, longer and more involved tactical battles help lengthen the game, especially in late stages when you are trying to break down the last strongholds.

Overall, RtK 3 is a fine sequel to a great series. Attractive VGA graphics and great soundtrack help bring medieval China to life. To prevent the game from ending too soon, though, play as a custom character instead and don't ask for advice from your advisors . 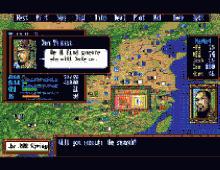 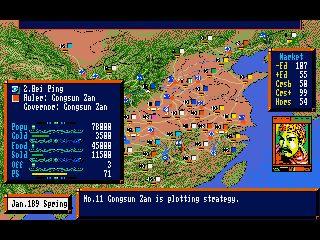 Romance of the three Kingdoms 3 screenshots