In my opinion the second-best KOEI series after Romance of The Three Kingdoms, this series is based on the awe-inspiring exploits of Temujin, a.k.a. Genghis Khan, the Mongol ruler who once ruled the biggest empire in the world. The RTK engine is tweaked to great effect to handle nomadic lifestyle and tribal warfare, such as the option to raze cities you conquer, more emphasis on hit-and-run style of combat, and more. One of the best features in both games is that after your unification of the Mongol empire is complete, you will have access to new strategic options, such as diplomacy, in your next step to conquer the known world. Definitely not to be missed!

Historical simulation series. In this game you have to conquer the world as Genghis Khan. You start of course with you Mongolian Empire or what is it called?

You can buy personnel, mercenaries from other countries to fight for you. There isn't much in this game you cannot do actually. If you love some good old strategy/simulation game, this might be a good game.

Genghis Khan 2, subtitled the Clan of the Grey Wolf, is a massive hybrid between a role playing game, a simulation, and a combat strategy. It was both created and released by KOEI, Limited, who seemed to be early masters of the combat strategies revolving around eastern cultures. With games like Nobunaga's Ambition and The Romance of the Three Kingdoms already under their belts, KOEI issued the Genghis Khan series in the early nineties. Like the other KOEI games, Genghis Khan 2 is battle exact and was greatly influenced by actual historical events. This is a turn based game, and was ported to many formats.

Clan of the Grey Wolf, similar to Nobunaga's Ambition and the RTK series, is a third person perspective game of unification. Like its predecessor, Genghis Khan 2 challenges the user to unite the kingdoms of the Mongol empire under the rule of one wise leader, for the good of the people. (The user can also choose to play a game of world unification and domination, which is much more time consuming and difficult.) Regardless of the scope of the game, the game play is similar. The user will have to balance and micromanage numerous facets of the country in order to keep it running smoothly, all the while expanding his empire.

Many of the issues in Genghis Khan 2 are very similar to other strategy and conquest games. Genghis Khan (or another world leader, if the gamer is playing the world unification portion of the game) will have to manage his economy by buying and selling goods, gathering resources and producing items. He will have to govern his people, control population, taxes and morale. The military is a factor, and it will be up to the leader to train a military, promote and demote generals based on their merit, and use the army to both defend and expand the nation. Diplomacy plays some part in the game, even within Genghis Khan's own house, as he will be required to attend to his own family relations. The gamer amasses “turn points” throughout the game, and every action he wishes to make costs some turn points. Therefore, it is unlikely that he will be able to accomplish everything he wants to on each turn, for lack of turn points, meaning some things will have to be overlooked and neglected.

There are many options to the game and four different scenarios to play where the user can play from the perspective of leaders besides Genghis Khan. There is an awful lot to keep track of in very little time, so the user is going to have to have his wits about him…and use them all…in order to keep control of the Mongolian steppe. 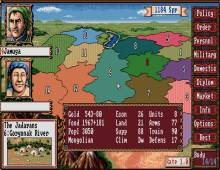 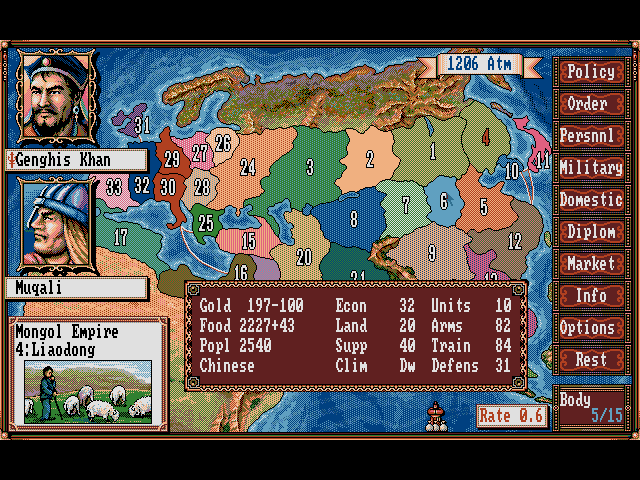