One of the truly greatest strategic games, Stronghold was almost unnoticed at the time of release. Featuring true unlimited replayability (and that is not just another claim), it is as complex as it is simple to control. In fact, it does not require any manuals, teaching you basic controls in the short but effective tutorial. Leading one of the races of AD&D world, you must establish your kingdom, defend it from other rulers and vile monsters alike, and above all, grow to prosperity. It doesnt matter if your heart is into woodcrafting or warfare or mining, Stronghold has it all to offer for a strategy gamer.

What a game! Think of Sim City in a fantasy-world. Great graphics and - that's what I really like - you can talk to your people! They tell you what they want and what they worry about. You create characters to lead your people and develop the land to finally defeat your enemies. REALLY good concept and fun for whole nights! The D&D-RPG-System meets a masterpiece of a building-sim.

A great tactical-level strategy game set in the AD&D world, this game is SimCity meets RPG formula. Build and expand cities, recruiting the AD&D denizens (dwarves, elves, etc.) while fending off AD&D monsters. The game broke new ground not by giving you godlike control over town expansion, unit production, and resource harvesting -- since that has been a mainstay of earlier fantasy wargames -- but by displaying all the action in real-time from bird's eye view that's similar to Bullfrog's classic Populous, if only much more detailed. Each townsperson has his or her own individual traits, and you can always click on them to find out who they are and what they think of you as their ruler. As in RPGs, troops gain experience and levels with every batton won, and wizards gain access to more powerful spells. Overall, Stronghold is a very polished fantasy strategy game that was sadly undersold. Highly recommended.

Build up a village into a stronghold. In order to do so you can train several characters, like Magicians, Clerics, Fighters, etc. just as in other D&D games. Elfs, Orcs, etc. Your winning is based on your alignment: If you want to be the badass you have to destroy all enemies, if you play the goodman, you just become emperor. 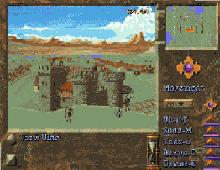 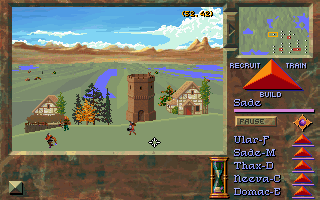 People who downloaded this game have also downloaded:
Settlers II Gold Edition, The, Populous 2, Master of Magic, Lords of The Realm 2, Magic: The Gathering