Last and arguably best in Mindcraft's short-lived series of tactical wargames that began with Siege, Wall of Rome is another step up from the much-improved Ambush at Sorinor. This time, fantasy units have been replaced by historical units from the ancient Roman era. This historical setting arguably makes the game more fun to play, as you can try out hypothetical scenarios such as pitting the Celts against the Greeks. The game mechanics are essentially the same as the previous two games, although the computer seems more competent at defending its castle this time around. The bottom line is: if you like Siege or Ambush at Sorinor, you will probably like Walls of Rome. If you don't, there's nothing here that will change your mind, except perhaps the excellent period soundtrack that really fits in with the game. 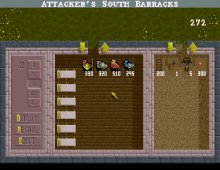