"All the games run on the same engine, with a few additions and improvements in the Caesar and Hannibal versions. Play is by turns, but who starts first each turn is determined by the quality of the leaders on each side, with the better ones getting additional phases within each turn. Each phase, a leader has a given number of orders, which varies according to that leader's quality, to allocate among those units in his Group that are within his command range, to rally, restore cohesion (repair), or move and fight. Leaders can order units that aren't part of the Group he commands, but at double the order cost. They can also issue Group orders for movements, attacks or repairs that ignore the command range and are much more economical, covering as many as 25 units in one phase. Group attacks are particularly impressive to watch, but of course the final placement is not as precise, with units seeking out the nearest foe.

All this means that a more realistic, flexible strategy must be adopted. You cannot be sure when your turn will start or how many phases you might have, and not all your units can receive orders every phase, unless of course you use the Group option. It also creates a lot of decision dilemmas and notable anguish waiting to see how your opponent will respond."

The game uses unit positioning and manoeuvres as the key to tactical success. Sheer size will not win you all battles. It is strategy that comes first and formost. How can you manage your force and make it conduct a complicated flank attack or piercing arrow movement is most important in this reviewer's experience. The interface of the games are smooth and the AI is extremely challenging.

Great Battles of Alexander follows the major battles in the life of Alexander the Great. To me, these are the most fun, (not most difficult of the 3) but most fun, simply because of the variety of terrain and opponents that Alexander fought on his conquests from East of Macedonia to the border of India. Great Battles of Hannibal follows Hannibal's battles against the Romans during the Second Punic War. Watch out for those Elephants! Hannibal's battles are very large and time consuming but more rewarding if you are victorious. Great Battles of Caesar deals mainly with the civil war between the forces of Pompey the Great and those of Julius Caesar. The battles contained in this sub game are the most complex and intriguing of the 3 collections. It is here that you must outwit the Ai and use your military brains to secure defeat, more than in the other sub games. As a student of Roman history, this collection will bring rewarding recreations of an important era in history. Finally, the Scenario Designer/Utility lets you recreate battles from ancient Egyptian times to the time of the Roman Empire. Many scenarios can be found online at The Wargamer.com archive, among others. Some of the excellent user-made scenarios include the great Thermoplyae battle from the Persian War between Greece and Persia. I've had much fun trying to defend that narrow mountain pass with a much smaller amount of men from the oncoming hosts of Persia.

Overall, The Great Battles: Collector's Edition is a must-play for every wargamer. The collection will delight wargamers and also fans of ancient history who don't get to see much on the market anymore of games covering this fabulous era. For those fans, this game is highly recommended-- expect to see many hours of challenge. 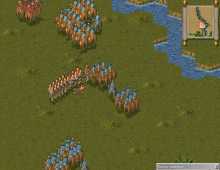