"This turn-based, hex-based wargame has over 40 scenarios, not counting four or five alternate scenarios for each of the major battles fought during the Civil War. The player can play either side, but the computer can not play itself. There are more than 15 campaigns: one covers the whole war, one covers only major battles fought in the East, one covers every battle fought in the East, one covers the Valley Campaign, and so on. A map editor lets you design your own battles on maps as large as 100x100 hexes. Each unit represents either a brigade or a regiment, depending on the scale of the battle. For example, in the Gettysburg scenario, units are brigades, which helps to prevent the brainlock that can result from trying to manage too many units. Each unit is rated with respect to organization, health, morale, experience and quality, and those numbers can be modified by leaders. A firepower number summarizes the overall strength of the unit. Units don't have a facing, but when they are attacked from opposite sides during the same move, they take heavier losses. As a result, I did not miss the lack of unit facing. Units have two formations, one for combat and one for movement. Unit statistics carry from scenario to scenario in the campaign, and can improve or degrade depending on casualties, leadership and experience.

There are various play options: at the easiest level, you can see everything on the map and shoot through hills, and at the most advanced, you can see units only if they are not blocked by terrain and you can shoot at them only if you have a clear line of sight, unless you are using cannons that have indirect fire capability.

Leaders play a very important role in this game. They are rated according to influence, organization, loyalty and health, and each of those numbers have a significant effect on units within their leadership radius. There are three kinds of leaders: Corps commanders have their own icons on the map, and when they are deployed, they have more influence than when they are mounted. Division commanders temporarily replace the commander of any brigade, and influence all the brigades of their division within their command radius. Brigade commanders influence only their own brigades. Leaders can add modifiers to the numbers of units under their command radius, so that a unit with an organization of say, 65 could have that number raised to 75 by a well-organized leader (it could be lowered too!...). Needless to say, leader influence encourages keeping brigades from the same division together, which makes the game more realistic. A nearby Division commander like Longstreet can turn the tide of battle.

Every action of a unit reduces its effectiveness. The effective size of a unit can be significantly less than its full size. For example, a brigade with a full strength of 2000 men could be reduced to 1800 men by losses due to combat, but its effective strength due to poor organization, morale, health and experience might be only 350 men. During a battle, a unit with an effective strength of half its men is in pretty good shape. A unit with poor organization can be reduced to an almost useless level by too much movement, which means that players must think before they run all over the map with a unit (unless it is commanded by Stonewall Jackson). This process of losing effectiveness reduces the problem of the "massacre" effect in Civil war games, where both sides fight until they are almost wiped out, resulting in unrealistically high casualties. When a brigade is attacked, it will usually suffer casualties between 5 and 50 men, so it is practically impossible to wipe out a unit by combat attrition.

This is simply a solid, enjoyable, and challenging turn-based wargame set in the Civil War.

Unlike its predecessor, Robert E. Lee: Civil War General, CWG2 lets you play either side of the conflict. You also have the option of fighting in the Eastern or Western theaters, through 46 historical scenarios covering such engagements as Fredericksburg, Gettysburg, Vicksburg, and Chickamauga. The game includes a whopping 17 campaigns - including one very impressive option to play out the entire war in both theaters. A vast throng of alternative scenarios is also included, and these come into play during campaigns whenever you change the course of history. All totaled, CWG2 packs in over 200 predesigned scenarios - surely enough to keep most Civil War buffs happy (or at least busy) for a long, long time. But if that isn't enough, you can whip up a few of your own with the game's editor. This fairly intuitive tool lets you customize existing scenarios and even sculpt an entire battlefield from scratch, placing all troops, terrain, and resupply points. When it gets to the actual gameplay, CWG2 is practically identical to Robert E. Lee: Civil War General. Game maps are set up on a hex grid, with decent terrain art and less-than-spectacular unit art. Actually, the unit art could stand some serious improvement. For one thing, I can't figure why the developers didn't take the time to include mirror images of each unit, so that they could at least change their facing from left to right (and vice versa). Many times, Union and Confederate forces meet on the field of battle with their backs turned.

The AI ranges from decent to devious and can be quite challenging on the hardest level. The game's victory conditions, however, are problematic. One scenario I played (Murfreesboro) was designed to run 81 turns. Even though I managed to drive the entire Confederate force into a general retreat by turn 20, and had occupied all of the objectives and all three enemy resupply points, the scenario kept going until I obliterated every single Confederate unit (turn 44). Not only was this frustrating, but it was sort of disturbing, too (being forced to slaughter routed troops can be rather distasteful). A "declare victory" feature, a la Sid Meier's Gettysburg!, would be a huge improvement here. Also, the game ran slowly in spots. This is particularly noticeable whenever the AI move is being calculated, but also pops up between scenarios, as the computer tries to figure out which way the campaign should branch.

Still, CWG2 can be a lot of fun. Some features, including the detailed battle summaries and hospital reports, are very well done. I also loved the between-battles weapon upgrades. Similar to Panzer General and its many siblings, CWG2 lets you upgrade each of your troops after each battle of a campaign. You can't purchase more troops, but you can load up on Napoleons and Parrott guns.

Even though the initial release of CWG2 was plagued by bugs and crashes, the 1.0.1 patch seems to fix these problems. After I applied the patch, the game behaved itself and was stable in both single- and multiplayer modes. Multiplayer CWG2 is available for two players over modem, serial, and IPX links. Internet support for the game is available on Sierra's free online gaming server (SIGS). Also, you can do it the old-fashioned way via hot-seat and play-by-e-mail games.

The final word on Civil War Generals 2? If you're a wargame or Civil War enthusiast looking for an extensive list of scenarios to keep you occupied for a while, this is definitely the game for you. 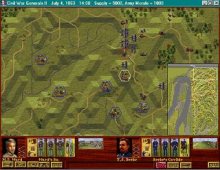 People who downloaded this game have also downloaded:
Panzer General for Windows 95, Close Combat 2: A Bridge Too Far, Allied General, Lords of The Realm 2, Great Battles: Collector's Edition, The