First sequel to SSI's breakthrough wargame Panzer General, Allied General is essentially the same game set in a different theatre in World War II, with some slight improvements and Windows 95 engine that makes the game much slower than its predecessor.

As opposed to the first game's emphasis on the Germans' operations, Allied General covers the Allied campaigns in the World War II European Theater of Operations, as well as North Africa. Gameplay is essentially unchanged from Panzer General, except that you can now command a wider range of units, and certain features of the engine have been tweaked to make for a more realistic game. The Allied's anti-aircraft guns, ships, and anti-tank units, for instance, are much more powerful than their counterparts in Panzer General (or at least that's my impression). This means that, as Allied, you now stand a chance against the Germans' formidable Panzer tanks. The scenarios and campaigns are all well thought-out and follow a logical progression, although anyone who wants to try to change history will be disappointed: you can only relive it in this game.

Overall, Allied General is a solid sequel that is more evolutionary than revolutionary. As with most sequels, SSI decided to stick with the safe "if it ain't broke, don't fix it" philosophy. As a result, Allied General just does not feature any revolutionary ideas to surpass its predecessor in terms of panache and originality. Given how original and playable Panzer General is, however, that is not necessarily a bad thing. It is unfortunate that SSI decided to port the game to Windows 95 platform, because it runs much slower, and the interface is much more cumbersome, than the DOS-based engine of Panzer General. Crisper graphics and better sound effects make up for this weakness, though.

Allied General is a historical war game basing around the Second World War. This game is the sequel to "Panzer General" with a few enhancements that have occurred to Allied General to make it a little different from Panzer General. The main changes occur to the units and missions. With these changes it gives enough change to the game to make it just as exciting as the first in the sequel. The game play is now on the ally side. You are playing alongside the Western Allies and the Soviet Forces.

You do have the choice to play on teams other than The Brits, such as The United States or the Germans, which will give you a different point of action for each team you choice to play on. This game allows you to have a view of what the war was like and experience it in your own way.

The benefit of this game is that it is available in DOS, Windows, and Macintosh all on one disk. Which allows easy load up and less confusion for users trying to load the game on another system.

Allied General is game that can be very easy to play or very difficult to play. With the option to play campaigns or just play in scenario mode you are able to choice how you play and where. Campaigns can be a little more difficult if you are just starting out with the game, so don't give up and keep on going. This game has a great strategic point and is as realistic as it can be.

For a game based around the Second World War, there are tons of maps and scenarios that make this game enjoyable for any player. You will always have a different experience with every level you play. With games like Allied General you get a basic knowledge on the wars that took place over the years. This allows a bit of learning while enjoying a little gaming excitement. This well laid out game strategically and graphically allows the player to enjoy the various maps and different scenarios making them want to play for hours upon hours. 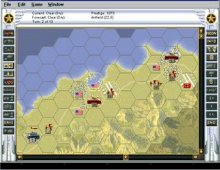