Arguably the best entry in SSI's 5-star series (except for Fantasy General) before the engine was upgraded for Panzer General 2, Pacific General covers both land and naval combat during World War II in the Pacific Theater of Operations. The game introduces many new elements to the tried-and-true Panzer General engine, including full-fledged naval combat module, complete with hundreds of painstakingly modelled ships of all sizes. You can take on the role of either the Axis or the Allied in a series of single scenarios or a full-blown campaign. Everything from the invasions of China and Burma and the attack on Pearl Harbor to the hypothetical invasions of the Japanese mainland (Operation Olympic) and San Francisco are here.

Like its predecessors, Pacific General is a grand strategic game with a charming simplicity. The addition of naval battles is handled with no less finesse than land-based battles. Naval units occupy more than a single hex and can suffer "critical hits." Aircraft can be placed on CAP to protect ships from air attacks. Submarines can now be submerged for attack, with just their periscopes showing above the surface. Aircraft carriers can now be "opened" to reveal a deck full of fighters ready for launching. The interface is a bit cumbersome, and the means of repairing damaged aircraft at sea is awkward, but the innovation allows for grand naval battles like Pearl Harbor, Midway, Coral Sea, Guadalcanal, and the Marianas Turkey Shoot to be re-created more or less accurately. As with other games in the series, the AI isn't tactically brilliant, but it's much better than the blatantly cheating module of the original. One of the best improvements is the fact that you can now move units after combat if it has movement points remaining. This movement-combat-movement is much better and more realistic than the chess-style combat-ends-move of the previous games. Grognards will also welcome native TCP/IP support for Internet play, which lets you square off against real opponents.

Although naval battles in the game sometimes are reduced into "frisbee" game of lobbing shots outside the enemies' range without any ship-to-ship combat, Pacific General is still a lot of fun and offers many more interesting historical and "what-if" scenarios than earlier games. Highly recommended for all fans of the series, and anyone looking for a solid World War II wargame.

Pacific General is a very popular war game, even today, as there are forums and websites dedicated to the game and those who can't get enough of "PacGen." The video game takes you through many famous battles of World War II that took place in the Pacific.

You first need to choose which side you want to be on: Allied or Axis. And you can choose to play a series of single scenarios or participate in a full blown campaign. There are 31 countries involved in the game, but only the United States and Japan have campaign modes. You will be put into some real battles (the attack on Pearl Harbour and the invasions of China and Burma) and hypothetical scenarios (an invasion of the Japanese and even a battle at San Francisco). Even the player can create custom scenarios.

This is a turn-based game allowing each player to plan their next move. The game is played on a map using icons that represent military units. There are many types of unit categories such as artillery, aircraft, aircraft carriers, battleships, forts, infantry, and tanks. A lot of attention is dedicated to naval warfare, including submarines that can launch stealth attacks under water. A few units are unique to each nation, such as the kamikazes available to the Japanese. To add an interesting factor into the game, some units aren't available at the beginning of the game. Certain units have specific entry dates as to when they become available to use. For example, jet aircraft can't be used by the US until playing in the hypothetical invasion of Japan, which is set in late 1945 to 1946.

Many factors aid or hinder in your ability to fight. If it is night time, the darkness can hurt troops' ability to move around. If it is raining, then air strikes are prevented. Combat includes multiple factors such as terrain, element of surprise, and critical hits. When troops are being fired upon, their offensive and defensive abilities are reduced. Troops can also boost their defensive strength by entrenching themselves.

"Prestige" is the money of the game. You earn prestige when you destroy enemy units. You use this prestige to upgrade or add units to your military. Prestige is also available to the beginning of each new scenario before you start combat. You also need to pay attention to each unit's fuel and ammunition levels.

This game has simple graphics along with basic gameplay, with not much attention given to detail. The idea is more of strategy than seeing blood and guts. You easily move your units, decide to attack, then choose another unit and repeat the process. This ease of play should make this game appeal to the newbies of the gaming crowd, but the game's interesting strategy plan should keep the attention of the more experienced gamers. 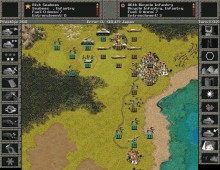