Of all SSI's releases in the "5-star" series based on the acclaimed engine of Panzer General, Fantasy General is my most favorite and one of the most underrated.

What makes Fantasy General one of the best fantasy wargames ever? For starter, each of the four heroes you can choose as your alter ego requires very different strategies to win, as well as follow his or her own path to victory. For example, the Archmage Krell is a powerful magic user, and therefore will command an army mostly consisting of magical creatures. Krell can also cast a magic spell every turn on the battlefield, which helps even the odds for his relatively weak army. The units in the game are also more than just Panzer General units in fantasy disguise: some units have spellcasting abilities, and some are unique heroes you can meet and recruit. All units improve their abilities with experience, and can be "upgraded" to better units when research is done.

While multiplayer options abound, they pale beside the excellent plot-based single-player campaign which spans 5 continents, each of which presents new terrain and units. Fantasy General also boasts several improvements over Panzer General and Allied General, the best of which is customizable research areas. As in previous 5-star games, you earn "prestige points" from winning each scenario to spend on new units. Here, you can also spend points on researching various unit types and setting priorities to suit your style, e.g. spend more points on air unit research to invent new units faster if you rely on air superiority. The game is also highly replayable, thanks to alternate routes you can take for most continents, as well as very different units each hero commands.

The only bad thing I can think of about this game is the fact that the last few battles are nearly impossible to win on the most difficult level. Other than that, the excellent gameplay, varied missions and units, great replayability, and one of the best soundtracks ever made for a computer game combine to make an unforgettable playing experience. A must-have for all fans of fantasy wargames, and truly a watershed in the entire series.

Fantasy General is a hex-based strategy game. Pick your hero, take your army, and lay waste to the various continents of the game.

Let me first start by saying I've NEVER been a fan of hex-based strategy. Always found it to be slow, boring, predictable and just not my thing. However, on installing Fantasy General again I was pleasantly surprised. The layout of the menus and design of the interface are easy to use and even without the manual those who are challenged for brain cells can get the gist of the game within ten minutes of playing and messing around.

The campaign game starts with you choosing one of a variety of heroes, each with differing units for their initial army and later acquisition. The game covers a huge array of units, from the lowly peasants with their pitchforks to mighty tree men, wyverns, dragons and catapults. As you progress through the game you find a huge variety of magic items and other heroes (some of which are truly awesome, but I'll leave the details for you to discover) in towns as you capture them.

On this note it must be said that the game is played not on a small scale battle but over huge expanses of country; numerous towns dot the map, rivers cut it, slowing units down, mountains and ravines cause natural chokepoints to help you destroy superior enemy armies. The terrain of the game is extremely important in every battle and must be exploited to its full advantage later in the game if you wish to defeat the superior armies. The first continent gives the beginner the idea that the game is but a case of charging forth and slaying all in your path. However, this approach soon leads to defeat. Units must be used like surgical tools, not some baseball bat with which to merely bludgeon your opponent.

The game is very deep in how every unit, hero and item is different and has different perks and bad points. The quantity of information to read about every unit is fantastic, although the plot is fairly basic in its "rid the world of evil" approach.

The graphics for the game are typical for a top-down basic hex strategy game, although the animations for the deaths of units are a nice touch. Fantasy General has a nice overall feel to it, reminding me of old crusty scrolls in its design.

I could only get the sound to work with VDMSound initialised; running DOSBox normally doesn't seem to get it to work. The music is very good and atmospheric, although personally I prefer playing with some of my own in the background.

The Arena function provides a welcome relief for those who wish for a game that isn't racked with tension as you lose your prize unit to a band of goblins – it is at these points that the option to save at any time is welcomed greatly. The number of maps available will also keep you busy for many hours.

Overall I was truly impressed with this game and, to be frank, the depth far outweighs any modern RTS game. Fantasy General will be on my hard-drive for a long time to come. 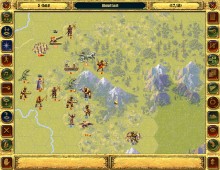