This is a hard-to-find version of Panzer General, one of the best wargames ever created. The original DOS version, released in 1994, was hailed worldwide as the first wargame to truly captured the interest of anyone who is not a die-hard wargamer. Given the complete control over land, sea and air units, your goal as a Nazi commander in World War II is to defeat the Allieds as fast as you can.

This Windows 95 version of Panzer General accentuates one of its best points: razor-sharp SVGA graphics and animations that replace "traditional" 2D hexes/tiles to draw you in to the action. Hundreds of Axis and Allied units are animated and accompanied by neat sound effects. Die-hard wargamers will turn up their noses at the simplified rules for supply and reinforcements, but for the rest of us, these simplified rules and great graphics make Panzer General an exciting game - the first truly accessible wargame to a non-wargamer.

In addition to reasonably accurate WWII units and missions, one of the best things about Panzer General is the ingenious use of RPG elements - the first historical wargame in history to do so. Similar to RPG games, units under your command gain experience points over time, the more battles they survive. Veteran units have better stats than raw recruits. Therefore, one of the keys to winning the game is to keep enough veteran units alive until the last few battles. Since the game allows quite a large number of such "core" units, this makes Panzer General a bit too easy to beat in my opinion (check out several good fanmade patches on Wargamer.com web link below that "adjust" the difficulty level upward by restricting the number of core units and tweaking their stats). In addition to experience points your units gain, your own successes and failures as commander are reflected through Prestige and Influence points, which you earn every time you win a battle, and can be used to upgrade your core units or recruit new ones. Replayability is limited without multiplayer, although you can replay most options to try to win "Major" victory as opposed to "Minor" ones (typically a Major victory just requires you to finish mission objectives in fewer turns).

If you have played the 1994 DOS version, this Windows 95 is pretty much the same game - although Windows-based menus (including on-line help) make the interface easier to use. To me, the best thing about this version compared to DOS one is the much wider viewscreen that allows you to see more of the battlefield at once. No more need to scroll around the map in the first mission, for example. Authentic WWII film footage that SSI adds to keep things lively is still there, although there is not much variety in them. If you never play a wargame before because you think they are all boring and impossible to understand, this is THE game that will change your mind. If you are a die-hard wargamer, Panzer General may still be an interesting proof of what it takes to draw in a non-wargamer without sacrificing the gist of what makes a wargame fun. A must-have! 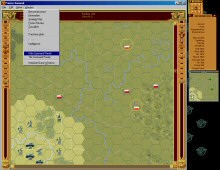