One of the best WW II games from SSI. In this game you even can choose to play as the Nazis. The gamefield consist of smaller hexagon-pieces (like Settlers of Catan) on which you can move you infantry, ships, tank, missile installations, etc. Gameplay has been made easy because of use of the mouse.

Panzer General is the original in a series of turn-based strategy war games developed by SSI. It predated Fantasy General by a single year, though both games are based on the same mechanics.

Panzer general is based in World War II, and you command at first, a small army which you must build up via successful missions. When you purchase units, keep in mind that you need a well-balanced army or the missions can give you a headache. As well, you keep your units throughout the missions and they gain experience. Keep in mind that more experienced units are generally more "valuable" than higher grade units without experience. Experience gives them more offensive/ defensive capabilities.

Like real war, the results ripple throughout your campaign. If you lose a mission you can keep playing but the game gets harder and harder -simulating real war. As well the entire campaign can branch into different directions depending on how you play the game. Some of the outcomes are quite fictitious while others can parallel history. Movement is based on a hex-map, with terrain factoring into the movement range of your troops.

This game features different unit types from fighters, bombers, infantry, tanks, and artillery. With each unit type/ grade having different stats associated with them.

A series of 38 scenarios link campaign mode together (playable by: Allies or Axis) that stretches between 1935-1945. As Germany there are five starting points:

1939 - Poland - Takes you west through Europe and into Britain

1941 - Barbossa - From Russian border into Moscow

1943 - Kharkov - One of the last German major offensives to the end of the war.

The graphics are exquisite, yet hand drawn. While the play styles are no different than the later parts of the series, or it's other SSI counterparts. User interface is easy to pick up on. Game mechanics are picked up easily. In 1995 it won an award by Origin for "Best Military or Strategy Game". 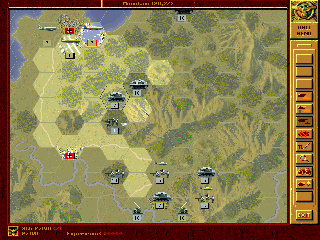