People's General is an extension of SSI's famous ?Five Star General' series that include some of the best selling computer wargames in history, and it shows in this game. Nothing is really radically new or different -- the game plays like a modern version of one of the earlier games in the series. Not that there is anything WRONG with staying with what works?quite the opposite, as you shall see.

One of the best things this game has going for it is the story, which is very realistic and scary in that it could actually happen. In the near future, as the United States and Russia slash their military budgets and Russia erupts with internal problems, China continues to grow stronger and eventually decides to 'reclaim traditional Chinese territories'. When they attack south-east Asia, the US sends the Seventh Fleet, the main Asian force, off of Taiwan to help protect the island and warns the Chinese to pull out. In response, the Chinese attack and sink the American carrier USS Abraham Lincoln, claiming it was in Chinese waters. The outrage over this unprovoked attack causes the President to ask Congress for a declaration of war, which is soon followed by most of the United Nations. World War Three is now at hand. The background story is told in great detail and effect by the game's intro, with matching music.

From the main menu, you can play a Tutorial mission, which will get you into the game at no time (you need the manual for this, as that is where it's explained). The other main options are for Campaign mode, Scenario Mode, and Multiplayer mode. In Campaign mode, you can play the whole campaign from either the Chinese or the US/UN side, do a shorter part of the main campaign, or try one of the 'other' campaign options, like playing as Veitnam and trying to take over South East Asia. In Scenario mode, you can play any of the battles in the game, and in Multiplayer mode you can fight a battle out with a friend, and there are unique MP scenarios also.

There's a wide range of battles you will fight on, all based on actual map data so it looks and act real. You will battle from the edges of the Ural Mountains to the frozen wastes of Siberia to the jungles of Thailand and the streets of Singapore. One must be careful of what kind of terrain you are on and how best to use your units on it.

If you play as the Chinese, the game is easier at first but then gets harder. When the war starts, the Chinese activate Plan Red, which calls for China to conquer as much of Asia as possible, become the strongest nation on Earth, and force the UN to accept their gains. Their forces lash out in several directions, and the US/UN suffer some horrible defeats, to the point where their forces are withdrawn from almost all of Asia. Russia loses everything east of the Urals and is forced to quit the war and sign a separate peace. During the first three years, you will enjoy a major advantage over your foes, but then once resistance finally gets heavy and the US/UN counter-attack, then the game gets harder.

As the American player, you start three years after the war broke out. It has taken that long for the US economy to gear up into war production, and finally the US/UN is ready to counter-attack. Your first battles are to save South Korea, which has been invaded by North Korea and Chinese forces, and show the Chinese your superior technology and training. Once South Korea is saved, your army is then sent to Russia, which has agreed to allow you to see if you can win some battles against Chinese forces on Russian soil -- without their help. The game is harder as the US/UN player, and you are often outnumbered on land, but you enjoy air and sea superiority, and your forces are better then the Chinese in equipment and technology.

People's General uses an updated version of the graphics engine in Panzer General II, and the controls are similar. The graphics are sharp and detailed. Cities look like cities, when it snows everything is white in the right places, and the units are detailed enough so you can easily pick them out. Sounds are average, with your normal combat sounds. There's only one music piece that plays during the game, but luckily it?s a good one. Left clicking will select units and allow you to move them, right click will show information or cancel. Even if you have never played any of SSI's earlier wargames, you'll get the hang of this in no time.

Like in SSI's earlier wargames, you are allocated a limited amount of Production Points each battle which you use to buy new units, upgrade older ones, or change their equipment types. There are over 30 nations that are represented in the game, as well as the generic UN units. Sometimes when you change equipment types you change the nationality as well. Due to most of the powerful equipment being American, British, or German, expect to have a lot of those units. Depending on how you did in previous battles will determine how many points you get. Also, units gain experience and special awards if they survive battles without being destroyed and some can be airlifted around on the map. There are three victory levels -- Major, Normal, and Minor, depending on many turns you took to get to your objective hexes.

Your style of play will differ greatly depending on which side you are, another thing the game has going in it's favor. As the Chinese, you can use your large numbers to overwhelm your opponent, sending in wave after wave till a tough position falls. You can afford to take your time and blast your way through on a wide front. As the US/UN player, however, you need to be more careful in how and where you attack. Often you will blitz your way through at all possible speed, bypassing the Chinese strong points and cutting them off, then bringing up heavy stuff to take your objectives. Time is always much tighter, and you will be outnumbered often and need to use your better units to win battles.

One major difference with People's General as opposed to earlier SSI wargames is how airpower is handled. The game handles it abstractly. You have choppers as a unit, but only one side has fighters/bombers. As the US/UN player, you can adjust at the start of the battle the percentage of Air Superiority that you enjoy. Assigning points to increase your percentage will give you more transport and attack points to use in the battle. Then you can call in air strikes with F-22 Raptors when the weather is good. As the Chinese player, you can reduce the other player's Air Superiority by assigning points, but you can never stop their air attacks altogether or make any strikes on your own. The Chinese player will then need to use SAM units a lot to protect key points. Another difference is that if you do well, at the start of a battle, you may be awarded the use of a prototype unit, a very powerful new unit in it's class that is not yet ready for mass production. Used carefully, this can give you quit the edge.

Some units also have a Commander, who will bring certain strengths into play with him. For example, a assigned commander to a Tank unit may have Increased Sight and Repair skills, which will allow his unit to see further and take more damage. You are also allowed to rename all of your units to make it easier to keep track off.

The game is not without flaws. The difficulty of the game for both sides is VERY tough, and you will often find yourself saving and reloading, and playing battles several times over. For as much realism that is in People's General, some of it goes by the wayside. Tactical nukes should be a weapon -- I would expect that one side or the other would use them, even if they agreed not to wage a full scale nuclear war. China also quits the war as soon as their conquests are gone and the US/UN is ready to invade China itself. I just don't see China acting like Germany did at the end of World War One and it would take American troops marching down the streets of Beijing before they would even consider peace. Loading times are a bit slow, and it would have been nice to have some voices in the game besides the intro, like in previous SSI wargames, or at least more animation. Finally, and the biggest drawback in my book, is no flowchart battle option. In previous General games, depending on the battle went you could often choose which battle to fight next. No such option here. It's all very linear and once the campaigns are done, the replay value is low. No wonder the battles are so tough.

In summary, though, People?s General is a great wargame. Although it might have been nice to have more to separate this game from the earlier 5-Star General games, it?s a fun and challenging game if you take it on its own merits. If you've played and liked any of SSI's older wargames, you're sure to like this one as well. Highly recommended! 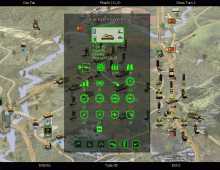